Galway International Arts Festival has opened with one of the highlights so far being an exhibition in the Connacht Tribune’s former printworks by Brazilian-born Ana Maria Pacheco. Video: Joe O'Shaughnessy 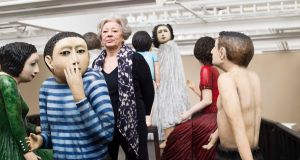 Artist Ana Maria Pacheco at the opening of the exhibition of her work in the Festival Gallery, as part of the Galway International Arts Festival. Photograph: Andrew Downes

A “Big Top” marquee will be pitched on the banks of the Corrib and the Galway International Arts Festival, which once ran off a €1,000 Arts Council grant, is up-and-running for a 40th year.

The visual art element of the festival opened on Sunday with exhibitions by Brazilian-born Ana Maria Pacheco and John Gerrard.

Pacheco’s solo exhibition in the Connacht Tribune’s former printworks explores issues of control and the exercise of power while Gerrard has used computer simulation to create a portrait of the rivers Amazon, Danube, Nile and Yangtze for his exhibition in NUI Galway’s O’Donoghue Centre.

Language and literature are examined by artists Seán Cotter, Gary Robinson and Thomas Brezing in a joint exhibition in Woodquay, while John Beard’s version of Theodore Géricault’s Louvre painting The Raft of the Medusa occupies The Shed on Galway docks.

Tickets for some shows are already or close to sold out, with a collaboration between RTÉ radio presenter Jenny Greene and the 48-piece RTÉ Concert Orchestra generating significant interest. The orchestra is also staging a “Night at the Proms” in the Big Top.

Kneehigh Theatre’s Tristan and Yseult, adapted and directed by Emma Rice of Shakespeare’s Globe theatre in London and Druid Theatre’s production of a Mark O’Rowe play directed by Annabelle Comyn are among other highlights. Actor Aaron Monaghan stars in an operatic collaboration between director and writer Enda Walsh and composer Donnacha Dennehy.

Syrian architect Marwa Al-Sabouni will speak about architecture, geography and conflict in the war-torn country as part of the festival’s “First Thought” series of talks.

3 Lies About Brooklyn, a memoir by Irish-American broadcaster John Farrell, a child of the 1950s mother and baby homes who was adopted from the Sisters of Mercy orphanage in Brooklyn, is being staged by the Galway Fringe Festival.

The Galway Fringe is presenting its sixth annual programme, which features Shakespeare in Connemara among 27 theatre productions and a plethora of music and art. Among its 100 diverse events in theatre, music and art are Squinty, written and directed by Seamus Moran, Galway soprano Aimée Banks in the Augustinian church, the fringe festival band showcase on July23rd, an art contest for aspiring artists.