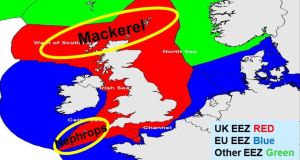 British environment secretary Michael Gove has said the UK government is “committed to protecting our strong, historic ties with Ireland” , in spite of its Brexit strategy to pull out of key coastal and offshore fishery management agreements.

Mr Gove has also said the UK government is keen to “work collaboratively” with the Republic to “help resolve any legal issues around the voisinage agreement” – a north-south agreement on reciprocal fishing rights.

A spokesman for Mr Gove’s department of environment, rural and food affairs (Defra) made the remarks after a conference call with Minister for Agriculture, Food and Marine Michael Creed on Brexit-related issues.

Mr Creed, who said he expressed his concern over Britain’s declaration last week that it was pulling out of the 1964 London Fisheries Convention, is now expected to review Ireland’s commitment to promised legislation on cross-Border fishing rights.

A spokesman said he was “reflecting” on the legislation, which is at committee state in the Seanad.

Mr Creed is expected to be questioned on Ireland’s Brexit strategy at a Joint Oireachtas Committee on Agriculture, Food and Marine meeting on Tuesday.

Both the London convention and an informal “voisinage” (neighbourly relations) arrangement between the Republic and Northern Ireland date to the mid-1960s, but Britain wants to withdraw from the first to close off any loopholes in access to its waters by European Union vessels – while also hoping Ireland will continue with its plans to legislate for the second.

Mr Gove’s declaration on July 2nd been interpreted as the first real “shot” on Brexit, and prioritises its intent to withdraw from the EU common fisheries policy (CFP) management system governing 12- to 200-mile limits.

He described it as “an important first step in becoming an independent coastal state – allowing us to control our waters and negotiate access with other countries”.

“As we prepare to leave the EU, we are committed to finding a solution that works for fishermen across the UK, including Northern Ireland, ” a Defra spokesman said.

Mr Creed’s department has denied that the Gove announcement came as a surprise. Three days before, at a Brexit debate at the Galway “Seafest”, Mr Creed had referred in general terms to the stated British intention to pull out of the 1964 legislation.

Mr Creed outlined his concerns about Britain’s withdrawal from the 1983 EU legislation, and consequent loss of access to the British 12- to 200-mile zone by Irish boats.

Irish boats catch nearly half of the total value of our annual quotas, principally for mackerel and prawns, in British waters.

However, he also pointed out that Britain is both a net importer and exporter of seafood, and relies both on the EU market and EU waters.

Within Britain, Mr Gove’s move has been welcomed by the National Federation of Fishermen’s Organisations, but the picture painted of a marine sector which can now control its own waters belies the reality.

Britain has surrendered a large slice of its fishing fleet ownership to industrial companies, both national and foreign. “Quota-hopping” by EU vessels, registering to avail of another country’s share of fish, has long been a feature of the CFP, with Spain being one of the prime practitioners.

A Greenpeace Energy desk investigation published in May 2016 claimed that just three companies – including the Dutch-owned Cornelis Vrolijk Holding BV – held 61 per cent of all fishing rights in England.

The move towards monopolisation, encouraged by the EU’s policy of prioritising cheap protein over the health of stocks , has also affected the Irish fleet to a lesser, but growing, extent. The Government says it opposes the system of individual transferable quotas which would allow supermarkets to run fishing fleets.

The industry here is divided on how Ireland should be approaching Brexit, with an influential section accepting that the EU has to negotiate on Ireland’s behalf. However, the Irish South and West Fish Producers’ Organisation, representing skippers closest to the grounds where the EU fleets work, argues that Ireland, with the second-largest sea area and some of the richest grounds, should play a stronger hand.

It argues coastal communities and stocks will be decimated by EU vessels displaced from British waters unless there is complete review of the CFP within Brexit.

Northern Ireland Fish Producers’ Organisation chief executive Dick James pointed out that coastal states of Britain, Ireland, Norway, the Faroes and Iceland would be served far better by co-operating – and could, in theory, “feed Europe”. Management of migratory stocks such as mackerel has long been international.

And fish know no boundaries, in spite of the best attempts by Mr Gove.