Severity ‘will depend on people’s actions over next two to three weeks’, says Robin Swann 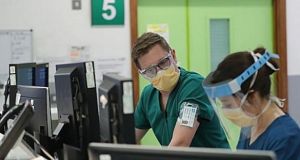 The North’s Minister for Health has warned that further restrictions will be necessary in the new year to combat an expected rise in coronavirus cases following relaxation of rules over Christmas.

Asked on Friday if the North is facing another period of restrictions in January, Robin Swann replied: “I would say at this point in time, yes. We will be.”

How severe and how strict that would be, he said, “will depend on people’s actions over the next two to three weeks”.

First Minister Arlene Foster admitted “concern” about the prospect of more restrictions in January. But she said it is not inevitable and the outcome is “within people’s own hands”.

A two-week “circuit-breaker” lockdown ended at midnight on Thursday, with non-essential retail, close-contact services and much of the hospitality sector allowed to reopen from Friday.

Cinemas, museums, galleries and gyms also reopened and church services resumed, with an increase in the number of people allowed to attend weddings and funerals. Pubs that do not serve food remain closed.

Police officers and Covid “ambassadors” from local councils – who can impose a fine of up to £10,000 (€10,900) for breaches of the regulations – will be more visible in public places.

Twelve more coronavirus-related deaths were reported by the department of health on Friday, bringing the total number of fatalities in the North to 1,111. A further 538 people tested positive for the virus.

Hospitals were full on Friday, with occupancy at 100 per cent and six hospitals operating beyond their available bed capacity. A total of 423 people with Covid-19 were receiving treatment in hospital, in intensive care.

Across Northern Ireland the average number of coronavirus cases confirmed in the last seven days was 164 per 100,000 people, with the highest rate – 263 per 100,000 – in the mid- and east Antrim area.

The public health expert Dr Gabriel Scally told the BBC that it was “absolutely stupid” to ease restrictions, saying that it would be “paid for with people’s lives and health . . . The virus hasn’t gone away and the levels are not down sufficiently enough to give anyone any degree of comfort.”

Mr Swann said he would have liked “stricter” limits in the run up to Christmas, but added that “we have to realise the time of the season we’re in and the fact that it is a five-party Executive. I am content that there’s enough guidance out there . . . we can keep this virus under control.”

Speaking after a meeting of the Executive on Thursday ahead of the easing of restrictions, Ms Foster said there had been “no suggestion” by either the chief medical officer or the chief scientific adviser that it should not proceed.

She defended the decision to ease restrictions, saying that the impact of the two-week lockdown had not yet been seen because of the lag between the introduction of restrictions and their impact.

According to separate data which is produced weekly by the Northern Ireland Statistics and Research Agency, there have been at least 1,501 coronavirus-linked fatalities in the North.

The agency data is based on death certificates completed by medical professionals and provides a broader picture of the impact of Covid-19 than the daily figures reported by the Department. – Additional reporting – PA