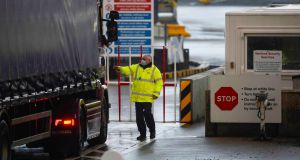 A truck driver checks in with security at the Port of Larne. Photograph: Mark Marlow/Bloomberg

Fuller enforcement of post-Brexit rules on goods arriving into Northern Ireland from Great Britain is expected to begin at the North’s ports from Friday, the North’s Chief Veterinary Officer has said.

The Stormont Agriculture Committee heard on Thursday that officials have so far operated a light-touch approach with few physical checks and instead focused on helping traders complete paperwork and keeping freight moving.

Robert Huey said their initial approach had been to implement the rules in a “sensitive, pragmatic and sensible” way, but the full enforcement regime would come in “gradually ... we will start winding it up.”

He was one of a number of department officials and industry representatives who gave evidence on the operational and practical issues arising from the UK’s departure from the EU and the end of the Brexit transition period on December 31st.

The North is the only part of the UK to remain in the EU single market for goods, and must therefore apply EU customs rules at its ports and airports. This means customs declarations and additional checks are now required for goods arriving in Northern Ireland from Great Britain, particularly agri-food products and live animal and plant imports.

Mr Huey said traffic had gradually been increasing at the ports, with 133 vehicles checked on Wednesday, and no containers sent back yet, though he added “I am certain that will happen, and that a huge kerfuffle will be made in the press when it does happen.”

Instead, he said, officials had been working with traders even though “sometimes it takes an inordinate of amount of time to work through the consignment with the operator” to show them how to fill out the paperwork.

“I have a member of staff who has literally sat with the supermarkets and with others and filled in their forms for them and showed them how to do it,” he said.

The Permanent Secretary at the Department of Agriculture, Denis McMahon, said officials had been forced to abandon their initial plan to rely on pre-notification paperwork by companies in Great Britain because of a “low level of professional compliance and the provision of basic paperwork”, which meant they had to “improvise a way of identifying freight units from a ship’s manifest” before their arrival into Northern Ireland.

He said short term “teething problems” were “to be expected”, and added that the Department’s intention was to reach a position where freight could travel with “as little friction as possible.”

In the last week businesses had “significantly improved their compliance” with the new rules, but some “significant issues” remained to be addressed in conjunction with the UK government,” Mr McMahon said.

These included the “complexity” of logistic chains, in particular customs arrangements for freight travelling from Great Britain to Northern Ireland via Dublin, difficulties for hauliers around the certification and sealing of groupage loads in Great Britain, and the need to prepare for the end of the three-month “grace” period regarding sanitary and phyto-sanitary (SPS) checks for supermarket consignments.

The “heavy lifting” must now happen in Great Britain to educate firms there about the requirements for sending goods to the North, he said.

Aodhán Connolly, of the Northern Ireland Retail Consortium, said this had also been seen in his sector, and a lot of suppliers from Great Britain “haven’t engaged as much with the new processes, weren’t as aware, and that is causing problems now” regarding deliveries to the North.

However he said supply chains for food and drink “are holding up” but the concern was that the grace periods “are simply kicking the can down the road and we need this workable, simplified, sustainable solution.”

Also appearing before the Committee, the policy manager for Logistics UK in Northern Ireland, Seamus Leheny, said there had been “a failure of a lot of companies in GB to understand their requirements”, which meant they “weren’t aware of any of these procedures and there’s [NOW]a panic there to get these systems in place and get the documentation done.

He said that one of the customs house clearance providers affiliated to the trader support service - the UK government scheme to help firms exporting to Northern Ireland from Great Britain - had been “overwhelmed” and was working “probably about two days behind target.”

Mr Leheny said firms were simply not aware of the volume of paperwork required. “A lot of businesses were told over the last couple of years that technology can solve anything and remove friction from customs. That myth has been disproven. You cannot simply wish away friction and admin where you implement customs controls anywhere in the world.”

He also called for greater flexibility at Dublin Port for goods destined for the North, explaining that 20 per cent of freight for Northern Ireland travelled via Dublin, and said there had to be a “transit agreement that works.”

“We’re seeing SPS controls in Dublin port being extremely stringent, for example, there was a lorryload of Quaver crisps arrived in Dublin port this week and there was a mistake with one of the commodity codes and that load was detained for 21 hours with the driver not allowed to leave the Border Control Post,” he said. “I don’t think Quaver crisps are a risk to public health, and I think a bit of flexibility, a bit of common sense [SHOULD BE]applied.”

Mr Leheny said the Government and Revenue should liaise with the trader support service to facilitate a more flexible transit system for Northern-bound freight, and for the IT systems on both sides of the border to be able to engage with each other.