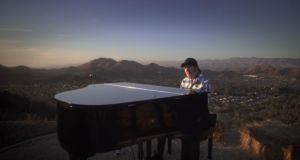 Veteran rocker John Fogerty could hardly have chosen a more opportune time to release his take on Donald Trump’s America than the day the president’s supporters stormed the Capitol Building in Washington with the world watching.

Weeping in the Promised Land is the former Creedence Clearwater Revival leader’s first song in eight years. It hit social media just as CNN and other networks reported the extraordinary scenes in Washington.

The song, which sees the 75-year-old trading his Gibson Les Paul guitar for a piano, is journey through life in the US during the four years of Mr Trump’s presidency and was written while he spent the Covid-19 lockdown in his California home.

He explained to Rolling Stone that he had first written down the title in one of his songwriting notebooks about 25 years ago and finished it a few years back but was not deighted with the end result.

Fogerty said that with the pandemic raging around him last summer, the phrase “seemed very relevant” so he decided to write an entirely new song built around the biblically inspired title.

He said he hit upon the opening line “Water in the well, been poisoned with lies” as he pondered how divided his country became under Mr Trump. It references some of the totemic moments of the Trump presidency such as the death of George Floyd, the Black Lives Matter movement and the country’s much criticised handling of the pandemic.

“It ended up being the hardest song I’ve ever written. I kept trying to find better words. You can always find a better word to describe a situation,” Fogerty told Rolling Stone.

Fogerty previously clashed with Mr Trump during the race for the White House after he began using Creedence Clearwater Revival’s ‘Fortunate Son’ at his rallies, oblivious to the irony of the song being about rich people leaving poor people to fight the wars they start.

He served “a cease and desist” order against Mr Trump, saying the president had used his words and voice “to portray a message I do not endorse”. His fellow rockers Tom Petty and Neil Young also issued similar orders againt Mr Trump.

In the interview, Fogerty said he understood why Mr Trump is so reluctant to concede defeat to Joe Biden, which led to yesterday’s violent scenes in Washington DC.

“It’s kind of like being a rock star in a band and then the band breaks up. I used to stand in front of 30,000 or 40,000 people and they were all cheering for me. I know what that is. I understand the emotion he’s feeling,” he said.

“The only thing he’s thinking about is some way he can retain power…. I keep asking myself, on January 20th, is he going to be sitting next to Joe Biden? Even if the sombre reality hits him that he’s not going to be president, he probably won’t show up.”