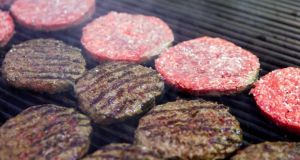 More than half those who buy frozen beef burgers are less likely to do so now because of the horse meat scandal which broke last January, according to research published this morning.

The study assessing the impact of the horse meat contamination issue on Irish consumer confidence was carried out by the Food Safety Authority of Ireland and found “significant changes” in consumers’ purchasing habits, with evidence emerging of an increase in awareness of food safety and provenance.

Of those who bought processed foods containing meat including such items as lasagne, and shepherd’s pie before the horse meat scandal broke, 42 per cent said they now buy less. People admitted to being worried about unknown ingredients, the presence of chemicals, medicines and the possible health risks of eating adulterated food.

The chief executive of the FSAI Professor Alan Reilly said that in the six months since the FSAI uncovered what would eventually transpire to be a pan-European problem of adulterated beef products across almost all members states there had been widespread debate about food safety and labelling which has “changed the way people in Ireland view the foods they purchase and consume”.

He pointed out that when people are buying processed foods they are not in a position to identify what raw materials are used and have to rely on labelling. “They are in effect putting their trust in the hands of manufacturers and retailers who have a legal obligation to ensure that all ingredients in their products are correctly labelled.”

He said a “key lesson” for food businesses is that they “must have robust supplier controls in place at all times to ensure that they know who is supplying them and that all products and all ingredients are authentic”.

He said progress had been made with enhanced controls and sophisticated tools such as DNA testing now being a part of the food safety armoury and expressed confidence that “the eventual outcome of this food fraud scandal will be a positive one for consumers.”