Journalist decided ‘he could wait no longer for government to be formed’, mourners told 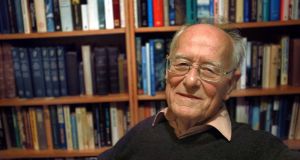 James Downey had journalism and politics in his blood, but last Wednesday he decided he could wait no longer for a government to be formed, mourners at his funeral heard today.

The former Irish Times deputy editor, who wrote his final column for the Irish Independent just last week , got an affectionate send-off in his native Dromahair, Co Leitrim, today (Saturday).

Friends from the worlds of media and politics joined family and neighbours in the picturesque village where “Jim” was born 82 years ago, and where, according to Fr John McTiernan, he witnessed the despair, poverty and forced emigration which was to inform his work.

In a warm tribute, the veteran political commentator’s daughter Rachel said he had become a journalist because he believed in a better, more equal world based on social justice and saw journalism “as a means to achieve this”.

“Dad was no dreamy idealist .He was a pragmatist who believed in responsibility, accountability and good governance, and he regularly bemoaned the fact that on these scores Ireland’s leaders had a long way to go,” she said.

Fr McTiernan recalled Downey’s humble start on the bottom rung of the journalist ladder, when at 18, he started writing the Dromahair notes for the Sligo Champion - getting paid per line. He also had to proofread the Donegal electoral register, which the newspaper then printed. “So his early journalistic life was not unadulterated fun,” said the priest.

As well as reminders of an illustrious careers in many key positions in The Irish Times and later as “the grandfather of political analysis” with the Irish Independent, the focus was on James Downey the devoted husband and father and besotted grandfather.

He and his wife Moira would have celebrated their 53rd wedding anniversary on Thursday, the day after his death. Fr McTiernan recalled how they had met at Victoria bus station in London, where they were separately about to take off for a holiday in Croatia, then part of Yugoslavia.

Moira, a smoker, asked him for a light, apparently despite the advice of friends who warned her that the Irish, especially when on holidays, drink too much. “Moira was not put off,” the priest pointed out.

The chief mourners were Moira, daughters Rachel and Vanessa , Jim’s sisters, Frances - who runs the local post office in Dromahair - Eva and Maria, his brother Tony and grandchildren Sean, James, Catherine and Colm.

Fr McTiernan reminded the congregation that Mr Downey’s passion for social justice had prompted “an ill-advised foray into politics” in 1969 when he had unsuccessfully stood for the Labour Party in a general election before “quickly exiting politics”.

Fr McTiernan reminded them that their colleague was always entertaining, and while a man who “did not do humility in full flight”, was, his daughter pointed out, always generous with his knowledge and expertise.

“He was a brilliant father who taught us so much and inspired us to learn more, from the Spanish civil war to the works of Tennessee Williams and South American politics, from the opera he loved to the tribulations of Crystal Palace football team,” she recalled.

Of his job in the newspaper he used to say: “It’s not work – it’s a privilege,” she added.