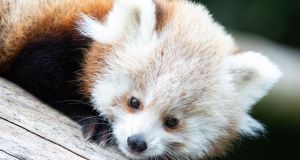 Fota Wildlife Park in Co Cork has unveiled twin baby red panda cubs who were born in June and have just started to venture out of their nest box in their habitat in the Asian Sanctuary.

The red panda is classified as an endangered species by the International Union for Conservation of Nature. There are less than 2,500 individuals left in the wild. International Red panda day is held on the third Saturday of September every year and aims to raise awareness, educate and fundraise to help conserve this endangered species.

Lead ranger at the park Julien Fonteneau said they were delighted to be able to announce the births of the twin cubs.

“The Red panda is definitely one of the favourite species with the public. These births give us the opportunity to highlight the conversation work that we do, such as our financial support for the Red Panda Forest Guardian Project in Nepal which is a citizen program that is dedicated to conserving the Red pandas in their natural habitat in Nepal.”

He continued; “The weather has been lovely and mild recently so after their first few months of just sleeping and feeding they are now starting to emerge from their nesting box, which is visible to the public in the red panda habitat.”

A unique species, the red panda is closely related to racoons and coatimundis. It is often referred to as the firefox or lesser panda and is up to 120cm in length, including an impressive tail of up to 60cm long. It forages amongst branches of trees but also eats fruit, insects and small animals.

Fota Wildlife Park, a conservation charity, has introduced an online booking system to safely manage the numbers entering the Park. The park is asking the public to help name the cubs at www.fotawildlife.ie/blog.