Foster warns support for Conservatives may be revisited over Brexit 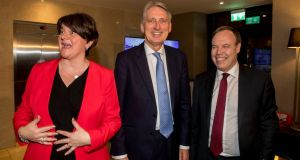 DUP leader Arlene Foster has said she will have to revisit her party’s commitment to propping up Theresa May’s Conservative government if there is any deviation from pledges to deliver Brexit.

Ms Foster and her deputy leader Nigel Dodds will on Saturday lead the DUP in maintaining its obdurate opposition to the EU-UK withdrawal agreement despite senior British ministers Philip Hammond and Liam Fox visiting Northern Ireland on Friday to argue for the draft Brexit deal.

DUP deputy leader Nigel Dodds will warn at the party’s annual conference in Belfast on Saturday afternoon of “consequences” if the British prime minister departs from her assurances to deliver Brexit, while Ms Foster in her keynote address will repeat that she cannot support the deal.

The votes of the DUP’s 10 MPs through its confidence-and-supply agreement with the Conservatives have ensured that the Tories remained in power notwithstanding that the party opposed the British government in a number of House of Commons votes this week.

“If this is not going to deliver on Brexit then of course that brings us back to the situation of looking at the confidence-and-supply agreement,” Ms Foster told the BBC on Friday night.

The British chancellor of the exchequer Mr Hammond, who spoke at a private DUP dinner in Belfast on Friday night, said earlier on his visit that the DUP and Conservatives “don’t always agree on everything but I’m sure we’ll sort it out. We are two parties that agree fundamentally on the importance of maintaining the union.”

Mr Hammond said the British government also would examine ways of providing additional assurances to avoid the backstop having to be used, including extending the Brexit implementation period.

The British international trade secretary Mr Fox on a visit to Newry on Friday raised the possibility that modern technology could be applied to ensure there was no hard border between Northern Ireland and the Republic.

But while Mr Fox supported the UK quitting the EU he said the withdrawal agreement was a “bullet we have to bite”.

Notwithstanding such pressure from senior British ministers and the insistence by a swathe of Northern Ireland business leaders that the Brexit deal was better than no deal, Ms Foster will hold her ground in her conference speech.

Her position also will be bolstered by Brexiteer Boris Johnson who is to address the conference on Saturday afternoon, shortly before Ms Foster’s address.

“The choice is not between this deal and no deal despite what the government spin machine may say,” the DUP leader will tell the conference.

“The reality is that if we are to secure a better outcome than is currently on offer then the only option is to look beyond this current draft withdrawal agreement and work in the time ahead for an improved outcome,” she will add.

As for business support for the draft deal, Ms Foster will say: “We cannot wish away the fact that the draft withdrawal agreement contains arrangements that are not in Northern Ireland’s long-term economic or strategic interests.”

Mr Dodds also will state that the confidence-and-supply arrangement is not with Ms May but with the Conservative party.

“The confidence-and-supply deal is a two-way street,” he will tell delegates. “The government’s commitments under it are clear . . . including on Brexit. Commitments freely entered into must be delivered and if they are not, then clearly, as we have shown, there are consequences,” he will say.

“Our agreement is of course with the Conservative party,” Mr Dodds will add. “It is incumbent therefore on all Conservatives in parliament who recognise the importance of continuing stability and who wish to see the government deliver its agenda to ensure it is honoured in full.”

With the Brexit negotiations reaching endgame, there is huge interest in the DUP conference which is being held at the Crowne Plaza Hotel in south Belfast rather than the La Mon Hotel, which has been the venue for several years. More than 100 journalists, photographers and camera crews from countries such as Germany, France, Austria, Italy and Spain are reporting on the conference.