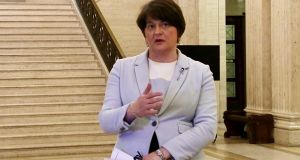 The North’s First Minister, Arlene Foster, has appeared to rule out a “Swiss-style” arrangement for agri-food trade from Great Britain, saying it would only be a partial solution for post-Brexit trade disruption across the Irish Sea.

The proposal had been mooted as a way of alleviating some of the issues around the operation of the Northern Ireland protocol by removing the need for checks on animals and plants arriving in the North from Great Britain.

The agreement in force between the EU and Switzerland avoids these checks because Swiss regulations are aligned with the EU’s rules on animal and plant health.

Her party colleague, the Minister for the Economy, Diane Dodds, had earlier said she was “not against a Swiss-style deal in and of itself” as a short-term measure, but questioned whether the UK government would agree to such an arrangement.

However Ms Foster on Wednesday said the Swiss-style option “of course only deals with one aspect of the protocol, it only deals with SPS [sanitary and phytosanitary] checks and only then if the whole of the United Kingdom is prepared to align with the European Union.

“So it doesn’t actually deal with all of the other issues around parcels and around business and all of those other issues, so it’s only a part of a solution and only if the United Kingdom Government would buy into the entirety of the UK aligning.

“So for us what we’re really interested in is a long-term solution, a permanent solution to the problems that we’re currently facing,” she said.

The First Minister has repeatedly said that the only way to address the issues around the protocol is to remove it completely.

The DUP has written to every UK MP referencing “significant anger” over checks on goods from Great Britain and urging them to take part in a Westminster debate on Monday triggered by the party’s online petition asking the UK government to take urgent action to restore “unfettered” trade.

Under the terms of the Northern Ireland protocol, the North remained in the EU single market for goods when the Brexit transition period ended on December 31st, necessitating a customs and regulatory border in the Irish Sea.

Unionists and loyalists in Northern Ireland are opposed to this and have called for the protocol to be scrapped, expressing concerns over the impact of trade and the availability of goods in the North since the protocol came into effect.

The Ulster Unionist Party has given its support to a Swiss-style deal, with the party leader, Steve Aiken, on Wednesday issuing a joint call for the five parties in the Northern Executive to unite to ask for a reduction in bureaucracy around agri-food checks.

Nationalist parties and Alliance argue that the “teething problems” around the protocol’s operation are the result of Brexit rather than the protocol itself, and instead urge all involved to work within its terms to address issues as they arise.

Neither Europe nor the UK has so far given any indication that it is likely to accede to unionist demands to scrap the protocol. The EU and the UK government will on Thursday engage in a series of virtual meetings with traders and other representatives of civic society in the North regarding the impact of the new trading arrangements across the Irish Sea.

Meanwhile the chief executive of Retail NI, Glyn Roberts, called on Wednesday for the “grace periods” which temporarily limit the amount of paperwork required under the protocol to be extended.

“It’s not just about extending these grace periods just for the sake of it and kicking the can down the road,” he told the Stormont Infrastructure Committee. “We do need long-term solutions to these challenges.”

Also giving evidence to the Committee, the finance and compliance director with Belfast Harbour Commissioners, Maurice Bullick, said that so far this year the operating model at Belfast port had remained “fairly stable overall ... but of course we all know that position is assisted by the presence of the various easements that are in place currently.”

Ricardo Tonelli, the general manager and director of the Port of Larne, said he was proud it had not experienced a “single day with a queue” since the Brexit transition period ended.

However he noted there were only a “handful” of checks currently happening at Larne, and said there was potential for disruption when processes intensified when the grace periods end.