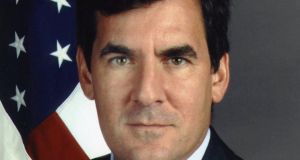 Mitchell Reiss: removing the major weapons was “a very important political symbol that the war was over”

A former US envoy to the Northern Ireland peace process, Mitchell Reiss, said he never expected IRA decommissioning to eliminate every last weapon but believed that removing the major weapons was “a very important political symbol that the war was over”.

Mr Reiss, president George W Bush’s special envoy at the time of decommissioning in 2005, said a last-minute request from Gerry Adams, later rejected, for the IRA to retain some arms to protect itself against dissident republicans was “an understandable request” from the Sinn Féin leader’s perspective, though that didn’t mean it was right.

“He may have had legitimate fears for his senior people’s health and wellbeing, and thought that if they could be allowed legally to possess guns, it might make it a little easier down the road and prevent them having to obtain guns,” he told The Irish Times.

Mr Reiss has said that the British government agreed to the request but wanted to check with the Irish government before proceeding, and that then minister for justice Michael McDowell opposed it.

Mr McDowell yesterday said Mr Adams passed on a request that some weapons not be destroyed so certain IRA members could be protected against possible attacks from dissident republicans.

“While the British government seemed willing to entertain such a proposal, the Irish Government at my insistence stuck to the point that the IRA must decommission all weapons in its possession.”

Mr Adams’ spokesman last night dismissed the claim the Sinn Fein leader sought to retain some weapons as “rubbish”. “There is not a scintilla of truth to this claim,” he said.

“It legitimately would have thrown a spanner in the works in terms of reaching an agreement,” Mr Reiss said in an interview.

He said that it was “certainly a possibility”, despite Mr Adams being rebuffed in his request, that the IRA had decided to withhold some weapons from the decommissioning process.