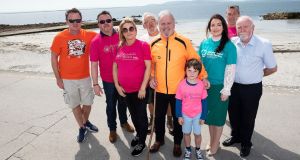 Ronan Scully sets off with friends on the Bay to Bay charity walk from Ardmore Bay in Waterford to Galway Bay this weekend.

A former Operation Transformation contestant will bring the distance he has walked for charity over the past 27 years to 10,000 miles in the coming week.

Offaly native Ronan Scully, who works for the charity Self Help Africa, embarks on his latest trek this weekend, a Bay to Bay walk from Waterford to Galway.

Ronan, who is the dad of two adopted Ethiopian daughters, Mia (12) and Sophie (9), says he has always been driven to work for charity since he first experienced the hardship and suffering of others, while volunteering with Mother Teresa in Calcutta, back in 1989.

The Clara man then spent more than a decade in India, Nepal, Angola, Ethiopia, Kenya and Sierra Leone.

Since then he’s run various marathon races, including one at The North Pole with Ultra Marathon runner Richard Donovan, has undertaken over 60 charity walks - including 10 trips on the Camino in Spain and France, and has hosted dozens of other charity walks in Ireland and overseas.

Last year he took part in a similar Bay to Bay walk from Dingle in Kerry to Galway Bay, while he also undertook a marathon canal walk in the midlands, ran the Uganda mini-marathon, and walked 420km from Courtown in Wexford to Kinsale in Cork with his good friend Martin Ryan.

The charities that will benefit from Ronan Scully’s Bay to Bay Walk are Self Help Africa, Rosabel Rooms in partnership with The Irish Hospice Foundation and The Galway Rape Crisis Centre.

While he has always been keen to combine his charity work with his interest in walking, it wasn’t until after Operation Transformation that he kicked up his efforts a gear and moved up to running marathons.

“I am looking at this walk as a celebration - of my own milestone, the time that I’ve spent working for charity, and also of the many incredible people who I’ve crossed paths with in this line of work over the past 27 years and who gave so much of themselves so that we could help so many people, families and children in need around our world.

“The Irish people are amongst the most generous people in the world. I feel very blessed, privileged and humbled to be able to do what I do, and to know that so many people have been willing to give their time, their hard earned money and their efforts to support a host of good causes.”

The Bay to Bay Walk, which started in Waterford on Saturday morning will take Ronan and his entourage through Waterford, Kilkenny, Tipperary, Offaly, Westmeath and Roscommon, as they wind their way to Galway - to arrive for a final leg of the marathon journey with a special 5km walk at 4pm on Saturday August 24th along the promenade from Galway to Salthill.

1 Covid-19: Two-week quarantine period for arrivals into State could be lifted for some
2 The momentum behind calls to ease lockdown may become irresistible for politicians
3 Trump announces clampdown on social media companies
4 Coronavirus: Schools should reopen in early stage of lifting lockdown, HSE experts say
5 Irish planning for no-deal Brexit to restart as EU-UK talks go badly
Real news has value SUBSCRIBE