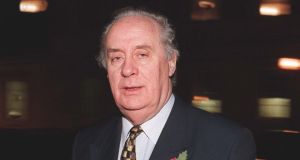 Paddy Harte TD at Leinster House in 1996: the Fine Gael politician served as minister of state from 1981 to 1982 under Garret FitzGerald

The death has taken place of the former Fine Gael TD Paddy Harte. He was 86.

Mr Harte was a Fine Gael TD from 1961 until 1997, representing the Donegal North East constituency.

He served as minister of state from 1981 to 1982 under Garret FitzGerald.

In latter years he was best known for the Island of Ireland Peace Park in Flanders, which remembers the Irish dead of the first World War.

He and unionist community leader Glenn Barr conceived of the park after a visit to the Western Front in 1996. Mr Barr died last October.

The park was opened on Armistice Day 1998 by president Mary McAleese in the presence of Queen Elizabeth II and King Albert of Belgium.

Mr Harte, from Raphoe, is survived by his wife, Rosaleen, and extended family including son Jimmy, a former senator.

Among those paying tribute to Mr Harte were former taoisigh Bertie Ahern and John Bruton.

“It is amazing the two of them died in such a short period. They put their hearts and souls into the whole Messines project. They deserve the highest commendation for the effort they put in that period.

“Before the peace park there was no great understanding or knowledge in Ireland of what happened in the first World War.”

Mr Bruton said Mr Harte had been an “original, independent-minded individual” from when he entered Dáil Éireann in 1961.

He added: “He was a resolute opponent of republican political violence. Working with Glenn Barr, he sought reconciliation between nationalists and unionists on the island, notably through the joint commemoration of the sacrifices both communities made during the first World War. This was often a lonely path for him to follow, and he showed great physical and moral courage.”

Tánaiste Simon Coveney said he learned of Mr Harte’s death with great sadness. “A man of principle, he was a consistent advocate for seeking to understand and reconcile the different traditions on the island. He was a frequent voice in favour of a pluralist Ireland where all traditions and cultures could flourish,” he said.

President Michael D Higgins said that Mr Harte would be “remembered not only as a popular and hard-working member of Dáil Éireann for nearly four decades but also for his work in support of the peace process in Northern Ireland and promoting the recognition of the Irish who fought and died in World War One.”

Minister for Justice Charlie Flanagan said Mr Harte “was a dedicated public servant who worked tirelessly to promote reconciliation between different traditions on the island of Ireland.

“In doing so, he helped the people of Ireland to better understand our own complex history as individual families and as a people.”

Fianna Fáil leader Micheál Martin expressed his sympathies to the Harte family. “Paddy Harte has left a lasting mark on Irish politics, not only through his work as a TD representing the people of Donegal North East, but also as a builder of bridges.”

Labour Party leader Brendan Howlin said Mr Harte will “be missed by all those who knew and served with him and will remember his work on Northern Ireland and the peace process”.

Donegal-based Minister Joe McHugh said Mr Harte had left a lasting peace process legacy through his cross-community and cross-Border work.“He also did incredible work to build bridges on this island during many dark days for our people.”

Mr Harte recalled in his memoir that the opening of the peace park was a memorable day: “It must rate as one of the most significant moments of true reconciliation between the peoples of Ireland and Great Britain in the last 80 years”.”

The Island of Ireland Peace Park was followed in 2005 by the nearby Messines Peace Village. Thousands of children from both sides of the divide in Northern Ireland have visited the peace village since its opening. It now attracts children from across Europe.