Karen Bradley to take over as new Northern Secretary 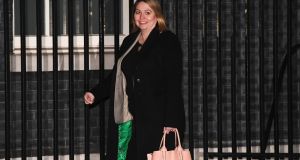 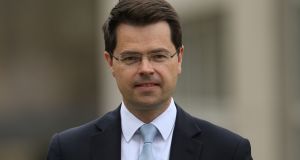 She takes up the Northern Ireland portfolio following the resignation of James Brokenshire earlier on Monday, due to ill-health.

The Northern Ireland Office confirmed his resignation, but gave no further details. However, a source close to the 50-year-old minister said he had decided to stand down because he was facing major surgery within the next couple of weeks.

The Old Bexley and Sidcup MP is a close ally of prime minister Theresa May, having served under her for five years at the British Home Office, and he was not among ministers who were predicted to go in Britain’s first major reshuffle since Ms May took office.

Explaining his decision, a source close to Mr Brokenshire said: “He has a small lesion on his right lung and is getting major surgery in the next couple of weeks.”

In his letter of resignation to Ms May, Mr Brokenshire said he expected to be able to return to work “relatively quickly” after his operation. But he said he recognised that he would not “be able to give the effort, energy and complete focus needed at this important time” and therefore believed that “the right thing at this time is for me to stand down from my current responsibilities”.

In response, Mrs May said it was “absolutely right that you should put your health first, for your sake and that of your family”. In an apparent signal that he may be in line for a return to government once he has recovered after surgery, the PM said Mr Brokenshire would have continued to do “a good job” had it not been for his illness, adding: “I very much look forward to working alongside you again when you are back to full health.”

Efforts continue to restore power sharing in the North which collapsed almost a year ago.

The news about Mr Brokenshire comes as Ms May unveils a cabinet reshuffle. Up to six ministers are expected to be sacked but the most senior ministers, including chancellor Philip Hammond, foreign secretary Boris Johnson and Brexit secretary David Davis, were likely to keep their jobs.

In an interview with the BBC’s Andrew Marr on Sunday, the prime minister restated her ambition to lead her party into the next general election.

“I’m not a quitter. I’m in this for the long term. I’ve said that before. I’ve said I want to fight that. Obviously, I serve as long as people want me to serve,” she said.