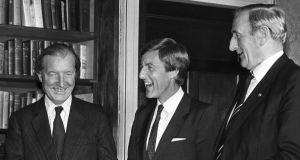 Former Fianna Fáil minister Gerard Brady has died at the age of 82.

First elected to the Dáil in 1977, he died at home in Donnybrook, Dublin, on Saturday.

He was appointed minister for education under taoiseach Charles Haughey in 1982. He also served as minister of state in the department of the environment.

President Michael D Higgins said he learned of his death with great sadness. “Those who served with him as a TD, member of committees, Minister of State or Minister, will remember Gerard Brady as one of the most courteous members ever to serve in the Dáil.

“Having served with him in Dáil Éireann, I recall his interest in the environment, arts, culture, particularly poetry, and global issues of poverty and deprivation in Africa, to which he dedicated his professional skills year after year.

“He will be missed by the people of Dublin South-East that he served, by his colleagues in politics, a wide circle of friends, but of course above all by his family, his wife Antoinette and his children Natalie, Cormac, Kieran and Brian, and his extended family to whom Sabina and I offer our deepest condolences,” he said.

Fianna Fáil leader Micheál Martin described him as a “dedicated public servant and a true gentleman” who had had “a long and distinguished career in national politics”.

“Gerard put environmental issues to the fore. He was ahead of his time in this regard,” Mr Martin said.

“As an optician by trade he would dedicate a month of his year travelling to Africa for humanitarian work. Over his lifetime he gave over many months volunteering in Sierra Leone, Uganda, and many other African countries using his skills as an optician to help those less fortunate.”

He is survived by his wife Antoinette and his children Natalie, Cormac, Kieran, and Brian.