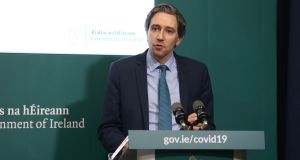 Updated regulations which will list those business that can and cannot reopen from Monday will be signed over the weekend, Minister for Health Simon Harris said on Saturday.

The Minister said the regulations meant it would be illegal for businesses to open unless they have permission to do so.

“We do have a list of who can and who can’t open. People have been really compliant, but technically there will be legal mechanism if businesses open when they should be closed,” he said on Saturday.

Hardware shops, garden centres, garage forecourts and bicycle repair shops are among the premises reopening from Monday in the first phase of easing restrictions imposed due to the Covid-19 pandemic.

Mr Harris acknowledged that there will be always be “grey areas” in some locations, such as hardware shops that sell homeware even though homeware stores are not among the outlets allowed reopen.

He advised shop owners not to open up unless they are able to comply with new regulations.

“We don’t want a situation where businesses open and then have to close because they don’t comply with public health guidance.”

He said it was important that people “do not get ahead of the plan. If we get into that mindset, we will end up in a very dangerous place.”

He advised the public, in phase one, to keep to meeting people who are not from their households outdoors and to continue to observe social distancing.

“It is our biggest national test so far as we have to find a way to live with this virus. There is no vaccine, there is no effective treatment. It has not gone away,” he said.

“If we get this right, it means that every three weeks we can do a little bit more. If we get it wrong, our plans will stall and perhaps reverse. Crucially, [if this happens] it means that many people will die or get seriously ill in our country. Our public health behaviour now becomes more important than ever.”

Mr Harris said face coverings when out in public were advisory, not mandatory, and there should be no stigma for those who do not choose to wear one.

Children under the age of 13 do not have to wear them and neither will people with allergies and asthma.

“It is not mandatory. It is guidance as an extra hygiene measure,” he explained.

Mr Harris said he was encouraged with the way that the numbers of those infected by Covid-19 are going down. The number of those in hospital from the virus dropped overnight from 419 to 390, and the numbers in ICU have dropped from 71 to 56 in the last week.

He also said that the public should not be alarmed about instances of paediatric inflammatory multisystem syndrome (Pims) or Kawasaki syndrome in children.

The European Centre for Disease Prevention and Control has issued an alert about 230 suspected cases of a new Pims linked to Covid-19, with two deaths reported. Pims shares similar disease characteristics to Kawasaki syndrome.

Seven suspected cases have been recorded in Ireland. The disease is thought to be linked to Covid-19, but more research is being done on it.

Mr Harris said there is now a “watching brief” in Ireland on the disease for monitoring purposes.

In a later interview on Spin 1038, Mr Harris said he expected some weddings to start to take place during the summer and larger weddings after that date.

“At the moment I can’t give you the certainty about how many people you can have at a wedding in August, but we are going to do a bit of work on this,” he said.

“We need to work out how we can live alongside the virus.”