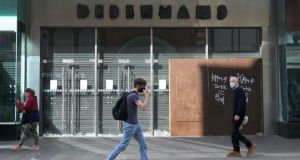 Jane Crowe, shop steward in the Henry Street store, said the Government’s approach to the controversy had been ‘totally hands off’. Photograph: Gareth Chaney/Collins

Jane Crowe, shop steward in the Henry Street store, said the Government’s approach to the controversy had been “totally hands off”.

Ms Crowe, who was employed by Debenhams for 24 years, said the workers were “not asking for phenomenal amounts” in redundancy payments. “We’re fed up with tea and sympathy,” she said.

“There are so many employers going to the wall and others will be treated the same as us,” she said.

In April the department store chain announced it was placing its 11 shops into liquidation, with 1,000 staff and a further 1,000 concession outlet workers losing their jobs.

Marie Murphy, who worked in the Henry St store for 20 years, said there had been “no action” from the Government on the dispute.

“I’m sick of listening to their words, workers need to be protected, and it’s not just the Debenhams workers, it’s gone beyond that now,” she said.

“A company we worked for for decades and gave loyal service to . . . I was devastated when this happened, I can’t get over how they’ve treated us . . . It’s just insulting,” she said.

On Thursday, the workers were informed that liquidators KPMG had declined an offer to re-enter talks with Mandate trade union, which is representing the workers.

Previously the liquidator had offered to provide a fund of €1 million to around 1,000 workers on top of statutory redundancy payments. This offer had been withdrawn following protests by workers occupying Debenhams stores in Dublin and Cork.

Gerry Light, Mandate general secretary, told the former department store employees in an email that KPMG insisted its previous offer had been the best it could provide.

“Based now on the fact that KPMG have no intentions of entering into further talks/negotiations it is important that all members intensify the pressure on Government and the various TDs through our political and lobbying campaign,” he wrote.

In recent days former employees have occupied a Debenhams store in Waterford in protest over the redundancy packages offered.

Previously Taoiseach Micheál Martin has said the workers had been treated “shabbily and shoddily and unacceptably” by the company.