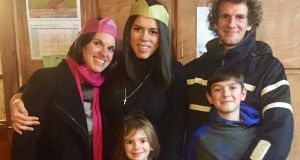 A young Brazilian woman taken to jail shortly after arriving at Dublin Airport ahead of visiting a Co Galway family for a holiday has been “traumatised” by the experience.

Paloma Aparezida Silva-Carvalho (24) previously worked as an au pair for the Muller-Wieland family in Moycullen.

She was detained by Garda immigration officers on Tuesday evening. It is understood the officers did not believe she was coming for a holiday and thought she intended to work while in the country.

Ms Silva-Carvalho arrived from Basle, Switzerland, on Tuesday where she had been visiting her fiancé. She was arrested at about 4pm in the airport and taken to the Dochas women’s prison at Mountjoy.

A habeas corpus application (which challenges the detention of a person) at the High Court was refused and she was due to be deported to Basle on Thursday morning. However, she was later given leave to remain in the State for 10 days and she was released shortly before 10pm on Wednesday night. She spent one night in prison.

Karin Muller-Wieland told The Irish Times she had employed Ms Silva-Carvalho to mind her children Aoife (8) and Reuben (12) between March and September 2016.

Ms Muller-Wieland said: “She was told by immigration officers she was being taken to accommodation and would be flying back to Basle on Thursday morning.

So she thought “ok, this is horrendous but I’m just being taken to accommodation”. They didn’t tell her where she was, she didn’t know she was entering a prison until she was asked to strip.

“She was strip searched naked and all her possessions were removed from her. She was put in a cell with an active alcoholic, who vomited the whole night, a metre apart from her bed.”

Ms Muller-Wieland said her former au pair was questioned by inmates at Dochas who said “well you must be here for a reason, did you import drugs? What are you here for...everyone is here for a reason”.

She said Ms Silva-Carvalho had wanted to get on the first flight home from Dublin Airport on Wednesday night but her husband collected her.

“She was so afraid to stay in Ireland in case she would be detained again,” she said.

Ms Muller-Wieland said she was considering seeking legal advice and submitting a formal complaint regarding her former au pair’s treatment at Dochas.

She added: “I don’t know if I can believe in the legal system anymore. I understand there has to be immigration laws to stop unlawful immigrants but this was a young girl coming to visit a country with everything in order.

“I feel a young woman was unlawfully held and treated like a criminal, her body was invaded on. I think the normal course of action would have been from the start to give her 10 days to sort herself out and maybe then told to leave Ireland.”

Ms Muller-Wieland said said Ms Silva-Carvalho had been visiting her fiance in Switzerland and planned to come to Galway for two months.

“Her mother is due to come and join her and their return flights for September 25th are booked and paid for.”

Speaking on LiveLine on RTÉ radio on Thursday, Ms Silva-Carvalho said she was stripped completely naked to “show that I didn’t have anything, I don’t know maybe inside my body. I was always trying to be strong and say don’t cry, but at that time I couldn’t”.

She said she shared a room with a homeless girl on her first night in jail.

“ Apparently she’s an alcoholic and the first night was terrible because I shared the room with her and she was all night vomiting, and the smell was horrible,” she said. “I remember I asked for water and the woman said ‘the water in Ireland is perfectly fine from the tap’ but I couldn’t drink, the bedroom was full of vomit. It was awful.”

Ms Muller-Wieland said that despite the initial trauma being over, her guest may now face difficulties in accessing other European countries on the basis of her detention in Ireland.

“I was speaking to our solicitor today who is a specialist in the area and he said that ultimately the massive concern and implications for Paloma are that despite her release that at every border in Europe she will still be known to have been rejected by the State of Ireland,” she said.

Ms Muller-Wieland said she would be bringing Ms Silva-Carvalho to a doctor in the coming days as well as seek some psychological support.

A Garda spokesman said he could not comment on individual cases, but confirmed Brazilian nationals do not need a visa to visit Ireland for up to 90 days.

A spokesperson for the prison service also said it does not comment on individual prisoners or cases, but that it “must accept all those committed to its custody and does not have the option of refusing committals”.

“The reception area of the Dochas Centre is where searching is normally conducted, i.e. on committal to prison and on discharge. On arrival to the reception area, prisoners were searched and were then asked to sit on the BOSS chair.

“At no time are male officers present in the reception area while women were being searched. A female officer supervises the prisoners as they are searched. All individual searching of female prisoners was carried out by female staff. Prisoners are given nightdress/gowns to protect their modesty.”