‘The wee family was coming home for the summer, but that’s not going to happen now’ 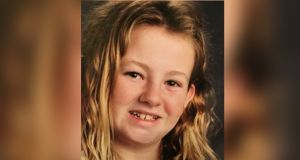 Cara Loughran was 14 and one of the youngest victims of the Florida shooting. Photograph: Family photograph.

The Co Antrim-based relatives of a victim of a US high school shooting in Florida say they have been left “broken-hearted” by her death.

Cara Loughran (14) who was a pupil at Marjory Stoneman Douglas High School in Parkland, near Miami, was one of 17 victims shot dead in a massacre on Wednesday.

The girl’s father is originally from Toome, a Co Antrim village where her grandparents Paddy and Ellie Loughran, and the extended Loughran family, live.

Fr Paddy McWilliams, who knows the Loughrans, told The Irish News the couple, who are understood to be in their 70s, were “very private” people and that they were distraught at the loss of their granddaughter.

“They are just broken-hearted,” he said.

“The wee family was coming home for the summer, as they do regularly, but that’s not going to happen now.”

It is believed Cara’s older brother Liam (17) was a witness to the school shooting but escaped uninjured.

Police in America have said, Nikolaz Cruz (19) a former pupil at the school, confessed to carrying out the attack and has subsequently been charged with 17 counts of murder.

“This morning I had to tell my 8-year-old daughters that their sweet cousin Cara was killed in the shooting at Stoneman Douglas High School yesterday,” she wrote.

“We are absolutely gutted. Cara was 14-years-old. She was an excellent student, she loved the beach and she loved our girls.”

A statement from Drake School of Irish Dance in South Florida, where Cara attended, described her as someone who was “a beautiful soul and always had a smile on her face”.

“We are heartbroken as we send our love and support to her family during this horrible time.”

The shooting was the deadliest at a school in the US since a gunman attacked an elementary school in Newtown, Connecticut, more than five years ago.

Meanwhile, president Donald Trump has met hospitalised victims from the horrific school shooting in Florida and offered thanks to the doctors and nurses who helped the wounded, declaring “the job they’ve done is incredible”.

Asked if he had talked with victims, Mr Trump added: “I did indeed, and it’s very sad something like that could happen.”

The president had tweeted earlier that he would meet with people “whose lives have been totally shattered”.

Mr Trump and first lady Melania Trump visited Broward Health North Hospital to pay their respects to the medical professionals who had responded to the shooting in nearby Parkland.

They planned to meet with law enforcement officials at the Broward County Sheriff’s office later on Friday.

But some of the parents, survivors and others affected by the tragedy at the high school said they were more interested in firm action to prevent future assaults than a presidential visit.

“I don’t want Trump to come but we want more gun safety,” said 18-year-old Kevin Trejos, a senior at the school where 17 people were killed and 14 injured.

Mr Trump marvelled at the speed with which first responders got victims to the hospital — but ignored shouted questions about whether guns should be more tightly regulated.

More than 1,000 people had attended a candlelight vigil on Thursday night near the school. - Additional reporting PA

1 Covid-19: Two-week quarantine period for arrivals into State could be lifted for some
2 Irish planning for no-deal Brexit to restart as EU-UK talks go badly
3 New rules for arrivals to Ireland start today - what is changing?
4 Miriam Lord: Taoiseach is trapped in a Zoom session from hell
5 Trump announces clampdown on social media companies
Real news has value SUBSCRIBE