‘Floating’ accommodation for students being explored in Galway 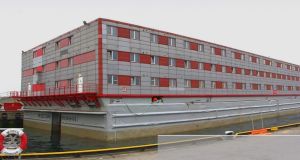 Winters Property management says it has been in discussions with Bibby Maritime to lease “high end” barges like the one above. This one, the Bibby Stockholm, has 222 en-suite bedrooms. Photograph: Bibby Maritime Ltd

Winters Property management says it could have two barges with space for more than 400 students docked in Galway in “three weeks” – but acknowledges that it could be next year before permissions are secured.

The company, which already manages purpose built accommodation for some 2,000 students at NUI Galway (NUIG), said it has been in discussions with Bibby Maritime to lease “high end” barges.

The Liverpool-based international company provides floating accommodation for construction in the oil and gas sector, and for corporate requirements.

Winters Property managing director Enda McGuane said the project was at the “feasibility” stage, as a location had to be found and necessary permissions sought for mooring.

Galway harbourmaster Capt Brian Sheridan said the existing docks, as a working commercial port with regular berthing by fuel ships, would not be suitable.

He has advised the property management company to explore other options, including the privately-owned Mud Dock in Galway harbour.

Mr McGuane said the legal situation also had to be explored. A recent Supreme Court appeal confirmed that if a vessel is moored to and floating over the foreshore, it requires planning permission.

Electronics engineer Shane Kennedy won his Supreme Court appeal, after Fingal County Council failed to establish the necessary “technical proof” that his vessel was located on the foreshore within the council’s functional area.

The Mud Dock is owned by Capt Sam Field-Corbett of Irish Ship and Barge Fabrication. He has several vessels berthed there which are fitted out for tourist accommodation.

Capt Field-Corbett is an advocate of waterside accommodation as a solution to the housing crisis, and has been seeking investors to convert the former Aran island ferry, Naomh Éanna into a boutique hotel in Dublin.

Among his maritime restoration projects have been the MV Riasc floating restaurant barge on the Grand Canal, and the MV Cill Airne, a restaurant and bar on Dublin’s North Wall quay.

Mr McGuane said he had made contact with Capt Field-Corbett for further discussions.

“We are all aware of the shortage of residential accommodation, and the reality is that it will take a number of years before supply catches up with demand. This won’t happen until Government addresses issues around land zoning, planning, finance and tax,” Mr McGuane said.

NUIG and Winters have also issued an appeal to homeowners to rent a room in their home to a student.

Galway has been hit by a 10 per cent increase in rents over the past year, according to a recent Daft.ie survey.