Flight diverts to Shannon after ‘suspicious’ phone found on board 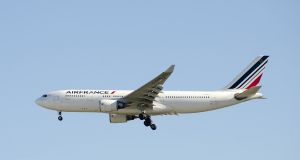 The Air France flight had been on route from Paris to Chicago when it landed at Shannon. Photograph: iStock

A transatlantic jet was forced to divert to Shannon Airport on Sunday after a “suspicious” phone was found on board.

Air France flight AF-136 was travelling from Paris, France to Chicago, having. taken off from Charles De Gaulle Airport in Paris shortly after 2.00pm Irish time.

The flight was almost two hours into its journey when the crew turned around.

The aircraft was about 250km off the north-west coast of Ireland when the pilot advised air traffic controllers that they wished to divert to Shannon Airport for “security reasons”.

At the time, the crew had been in contact with controllers at the Irish Aviation Authority’s North Atlantic Communications Centre at Ballygirreen in Co Clare.

The flight was cleared to turn around and divert to Shannon where airport authorities and An Garda Síochána had been alerted to the situation.

The aeroplane descended to 6,000 ft, where excess aviation fuel was burned off to ensure they could land within safe weight limits.

It’s understood that a mobile phone was found on board the aircraft and that efforts to identify an owner were unsuccessful.

The phone was discovered by a passenger wedged down the side of a seat.

A number of announcements were made over the intercom system and when no one came forward to claim the phone, the crew opted to divert to Shannon.

The flight landed safely at 4.41pm and was pursued along the runway by airport fire crews who were mobilised as a precaution as the aircraft had made an overweight landing.

The Airbus A330-200 jet was directed to a remote taxiway, where airport police officers and gardaí were waiting. A number of uniformed gardaí­ and plain-clothes members were dispatched to the airport.

The phone was removed from the aircraft and taken to the terminal building, where it was scanned by airport police officers and gardaí­. The passengers were not disembarked from the flight.

It’s thought that the phone may have been left behind by a passenger from a previous flight and that it lay undiscovered when the aircraft was cleaned later.

The jet was later moved to the terminal building where it was refuelled before continuing its journey to Chicago shortly before 7.00pm.

Garda insp Paul Slattery of Shannon said: “The phone was removed from the aircraft and taken to the terminal where it was X-rayed by airport police officers and gardaí­. Once we were satisfied the phone was safe, it was returned to Air France staff.”