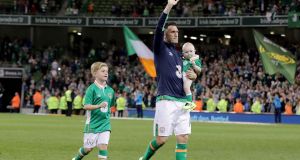 Ireland’s Robbie Keane and his sons Robert and Hudson are applauded off the pitch at the end of his final game with Ireland. Photograph: INPHO/Morgan Treacy

1.Talks between Independent Ministers and Fine Gael today will seek to defuse a growing crisis in Government over how to respond to the European Commission’s €13 billion tax ruling against Apple over its operations in Ireland.

Independent Ministers yesterday refused a request from Minister for Finance Michael Noonan and Taoiseach Enda Kenny to agree an appeal against the ruling.

2. CAO round two offers hope in Arts and Science

The CAO has offered the last batch of places for the 2016-17 academic year. There was good news for applicants who had just missed out by 5 or 10 points on their preferred course in the first round.

Seven luxury cars and €80,000 worth of cannabis has been seized as part of a Garda operation targeting organised crime gangs.

A man in his 50s was arrested after his car was searched on the N11 in Co Wexford on Wednesday, where stolen car parts were found.

4. Robbie Keane signs off Ireland duty doing what he does best

Emmet Malone on Robbie Keane’s last game for Ireland: All those tight corners which Robbie Keane got his team out of over his 18 years on the scene were loudly remembered as he made his exit, for the very last time, in the 58th minute against Oman in the Aviva Stadium.

5. Cavan deaths: Hawe family to be laid to rest in home parish

All five members of the Hawe family will be laid to rest in their home parish in Co Cavan on Saturday.

Gardaí were last night continuing to examine the Ballyjamesduff house where Clodagh Hawe and her three sons were murdered by their father before he took his own life.

The remains of Ms Hawe, her husband, Alan Hawe, and sons Liam (13), Niall (11) and Ryan (6), will repose at Finnegan’s funeral home in Cavan town between 3pm and 8pm tomorrow.