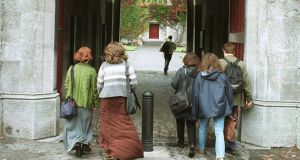 Five female academics have said they are instituting legal proceedings against NUI Galway (NUIG) over gender imbalance at the university.

The development came even as NUIG’s governing authority said it was accepting a recommendation to promote three additional staff members as a result of a number of “scoring errors” in the 2014 senior lecturer promotion round.

NUIG is also seeking an equality review of the “entire higher education sector” by the Irish Human Rights and Equality Commission (IHREC).

The five women, all of whom were passed over for promotion in both 2009 and 2014, said they had no information on the promotion recommendation.

Dr Sheehy Skeffington has pledged to use the €70,000 she was awarded by the Equality Tribunal to help them fight their case.

They said that Dr Browne explainedthe university was seeking legal advice on the implications of the Equality Tribunal report for the five who, like Micheline Sheehy Skeffington, were not promoted in 2009.

“The president has acknowledged that NUIG needs to address the gender imbalance amongst senior staff,”the female academics said.

“We are hoping that a resolution to these issues can be found internally, without recourse to the courts,”they said.

“However, we must protect our positions and as such we are instituting legal proceedings against the university this week,” they said, adding that they remained “hopeful that the matter can be resolved quickly”.

Earlier, NUIG’s governing authority said it had agreed to a number of recommendations on gender equality, including a review of the senior lecturer promotion “process” in “the light of the 2008/09 experience and also the more recent 2013/14 promotion round”.

It said that the college was committed “through its strategic planning process”, to develop gender equality initiatives through the international Athena Swan programme which promotes best practice in combating gender under-representation in higher education and research.

NUIG came the bottom of the gender equality rankings in a recent Higher Education Authority (HEA) report, but the university’s governing authority said that the HEA report made it clear that gender equality was an “issue for the whole higher education sector in Ireland”.

It said that NUIG intends to write to the Irish University Association and the Higher Education Authority to request that the Irish Human Rights and Equality Commission be approached to carry out an equality review of the entire higher education sector.

NUIG is currently appealing an €81,000 award which the Equality Tribunal directed that it pay lecturer Mary Dempsey last summer, after it found that she was discriminated against by the university on the grounds of gender, family status and disability.