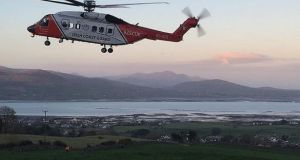 The men were rescued by the Coastguard shortly after abandoning the FV Kayleigh, based out of Skibbereen, Co Cork. Photograph: Irish Coast Guard / PA

Two fishermen were severely burned when they were engulfed by a fireball while trying to deal with a blaze onboard their sinking ship last March.

The men were rescued by the Coastguard shortly after abandoning the FV Kayleigh, a 13m fishing vessel, based out of Skibbereen, Co Cork, according to a report from the Marine Casualty Investigation Board (MCIB). The boat is presumed to have sunk some time later.

According to the MCIB, the fire likely started in the engine room. The skipper heard the smoke alarm go off sometime after 10pm on March 3rd before he spotted a fire on the starboard side of the engine.

He shut the engine compartment hatch in an effort to starve the blaze of oxygen before he and the other crew member gathered fire extinguishers to fight the fire.

They opened the hatch to the engine room but “in the heat of the moment” forgot the guideline to keep as low as possible.

“The skipper stated that when he opened the hatch a fireball immediately erupted out through the opening and engulfed the two crewmembers resulting in burns to both their upper bodies, arms and heads. Their hair was on fire,” the MCIB said.

“While both crewmembers suffered burns the skipper’s burns were worse due his closer proximity to the opened hatch and fireball.”

After recovering their senses, the crew abandoned the vessel in a life raft and were rescued by Castletownbere Lifeboat which had responded to their mayday. They were then airlifted to hospital for treatment.

The empty vessel was tracked by the LÉ James Joyce. The next morning a Coastguard helicopter was sent to find it but could only locate an oil slick, indicating the Kayleigh had sank.

The MCBI made several recommendations following its investigation, including strengthened safety inspection regulations and that boat owners be reminded of the mandatory requirement for smoke alarms in engine rooms.