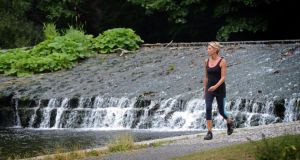 The weir at the Dropping Well on the river Dodder, one of the barriers to be modified in a new fish-pass scheme. Photograph: Eric Luke

Several man-made weirs on Dublin’s Dodder river are to be modified to allow wild salmon and sea trout back upstream for the first time in more than 200 years.

The fish have already begun to recolonise lower stretches of the river after recent improvements to water quality.

However, they are unable to advance further up the river to spawn because of a series of weirs, dating from the 18th and 19th centuries.

The scheme is to be incorporated into the flood defence plan for the Dodder area.

The Dodder rises in the Dublin mountains and flows down through Tallaght and Rathfarnham in west Dublin, on through Donnybrook and Ballsbridge in the south city before flowing into the Liffey estuary at Ringsend.

Because the river’s lower section is tidal up to Ballsbridge, migratory fish such as salmon and sea trout, which need freshwater to spawn, have only a short stretch of river to reproduce before they run into a series of weirs, beginning at Beaver Row in Donnybrook.

The councils are examining modification options to make the weirs passable without damaging the aesthetic of the river.

They may opt to build rock ramps or diversion channels on some of the larger weirs located at the Dropping Well in Dartry, Orwell Road in Rathgar and Terenure Park.

The scheme is unlikely to extend further than the high weir at Firhouse, built on a natural rock sill in 1700 to divert water to a reservoir near James’s Street, which served as the city’s first public water supply.

“If we can provide passage around or over these structures, the water is of a sufficient quality to allow salmon and sea trout re-establish populations,” said Martin O’Grady of Inland Fisheries Ireland.

The shallow, gravel-bottomed, fast-flowing waters of the Dodder would provide ideal spawning and nursery grounds for salmon and sea trout, he said. “After these weirs are made passable, I’d expect to see wild salmon spawning in Templeogue the following winter.”

The proposed fish passes will also be made accessible to lamprey eels, another indigenous species.

“The scheme is an attempt to open up the upper reaches of the Dodder to fish and eel species which would have been native to the river,” Gerard O’Connell, project engineer with Dublin City Council, said.

He said he expected work on the scheme to begin in the coming months.

Welcoming the news, Paddy Conneff of the Dodder Anglers’ Club said the barriers have proved an obstruction to natural fish migration, and the scheme would restore the river to its natural state.