Through the mists of time, the bloody Battle of Messines renders an unlikely friendship

The battle of Messines during the first World War was a unique moment in Irish history, unionist and nationalist soldiers from Ireland fought alongside each other for the first time. Video: Enda O'Dowd 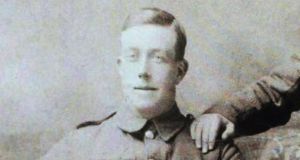 William Monaghan was a member of the 36th (Ulster) Division which fought at the Somme, Messines Ridge and Passchendaele, where he was killed.

It is famed as the first battle of the first World War in which soldiers from the Ulster and Irish divisions fought side by side; but, 100 years on, the Battle of Messines has created an unlikely friendship.

Liam Ó Manacháin, an Irish teacher from Armagh who previously stood for election for Sinn Féin, had no idea his second cousin Donald Monaghan – a former UVF prisoner – even existed until he researched the battle’s impact on his family.

Their great-uncle William Monaghan was a member of the 36th (Ulster) Division which fought at the Somme, Messines Ridge and Passchendaele, where he was killed.

His battalion of the Royal Irish Fusiliers, the 9th, was made up of Ulster Volunteers from Armagh and Monaghan; Monaghan’s signature is on the Ulster Covenant of 1912, which pledged to defeat Home Rule “by all means which may be found necessary”.

His brother Robert – Donald Monaghan’s grandfather – was wounded at the Somme and lay in No Man’s Land for four days until he could make it back to the British front lines. He was later taken prisoner, but managed to survive the war.

“At the top of the stairs in my granny’s house there was a scroll within a frame,” said Ó Manacháin. “It read: ‘William Monaghan’, and it had his number and rank and a list of the places where he had fought. We also had Uncle William’s pocket watch.”

It was only when he began trying to contact relatives in the United States that he found out about Donald Monaghan.

“I’d never heard of him, I knew nothing about him, but we’ve become friends. We talk about things like the history of the war, and we have a similar outlook on things like world events.”

Monaghan joined the UVF in the early 1970s and served time in prison for possession of a firearm. He left the organisation upon his release.

“I was brought up a staunch loyalist although I’m not a great religious person, I’m an agnostic by choice, but I do stand strongly for personal liberties. I used to sing anti-war songs, and then I ended up in a war,” he said.

“The IRA bombed the Courthalds factory in Carrickfergus where I worked. My brother-in-law was blown through a wall, and nearly died. I joined the UVF,” he added.

“That explosion had a big effect on his family, and he felt that he had to join,” said Ó Manacháin. “I ask myself, I’d been young in 1972 and something like that had happened to my family, what road would I have taken?”

Times are different now, he said.

“We each have our views, and we know what the other stands for and believes in,” said Monaghan, who now lives in Bulgaria. “Certainly I never suspected I would have a friend like Liam, but he’s family.”

The two men are now planning to meet for the first time, and hope see for themselves where William Monaghan fell.

“I always wanted to go because my dad always wanted to see Uncle William’s grave, but the big thing for me was Martin McGuinness going to the Somme last year,” said Ó Manacháin. “I felt that what he was trying to do was build a bridge, and it made me feel it was time to get our story out there. Maybe people who haven’t wanted to say they had somebody who fought in the war might be inspired to come out and talk about it.”