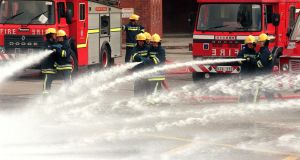 Since 2012, the fire service has inspected 7,809 premises, including 890 apartments. Photograph: Paddy Whelan

Works are under way to remedy fire safety deficiencies at 24 apartment developments around Dublin city, according to Dublin Fire Brigade.

The fire service said it is aware of two dozen instances where the deficiencies found in apartments are serious enough to require remediation, which can cost tens of thousands of euro and involve significant works.

It would not share the names of the developments or their locations, but said it was working with management companies on the remediation programmes. The developments are spread around the city.

The figures only refer to remedial works currently under way, according to the fire service. The number of developments facing potential fire safety issues which have been identified but are not yet being remediated is likely to be significantly higher.

Since 2012, the fire service has inspected 7,809 premises, including 890 apartments. Depending on the seriousness of what is found, issues can be addressed immediately, while other issues require the completion of fire-risk assessments or follow-up inspections. A smaller number require more substantial remediation works to varying degrees, it said.

It has extensive powers under the fire safety Acts, including ordering the evacuation of a building, as it did at Priory Hall in 2011. A spokesman for the fire service said it would use its enforcement powers “when warranted. However, our main focus is on safety and we will work with OMCs to ensure that they carry out any remedial works required, to help them improve the fire safety in their building.”

This comes after it emerged that property owners at Verdemont, in Blanchardstown, are facing bills of up to €50,000 each to remedy fire safety issues at the block. Documents seen by The Irish Times show apartment owners have consulted with accountancy firm BDO about potential financing solutions, including private equity firms and investment funds. Under one plan, an investment fund could purchase apartments from owners and complete the works required.

According to a note sent to residents, management has also met with representatives of Taoiseach Leo Varadkar who have brought their concerns to the attention of junior housing minister Damien English.