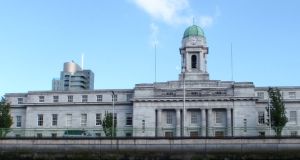 The Cork Housing Action Group said the group were seeking to highlight the growing housing crisis both nationally and on Leeside.

Gardaí are to prepare a file after arresting three members of a housing action campaign after they refused a request to leave Cork City Hall. They had occupied the council chamber in peaceful protest to highlight the housing and homelessness crisis.

Four members of the Cork Housing Action Group had entered Cork City Hall and occupied the council chambers at around 11am this morning and remained there for around four hours, refusing repeated requests from gardaí to vacate the premises.

Gardaí arrested three of the four activists at around 3.20pm for trespass under public order legislation and brought them to the Bridewell Garda Station. They were released after providing gardaí with their names and addresses and a file will now be prepared on the matter for the Director of Public Prosecutions.

Cork Housing Action Group chairman, Tony Walsh said in a statement that the group were seeking to highlight the growing housing crisis both nationally and on Leeside. They criticised the decision by Cork City Council and Cork County Council to spend €300,000 on a new marketing logo for Cork.

Mr Walsh also criticised the decision by Cork City Council to spend €5 million on a new pedestrian footbridge across the north channel of the River Lee at Harley Street. He said it typified the attitude of a council which was failing to deliver a proper housing service for its people.

“Council seems more concerned with corporate image and large scale development projects than with delivering on housing rights – millions are being wasted on a bridge that no one wants and on other such extravagant waste,” he said.

“To spend €300,000 on a logo is insulting to those families in social housing who badly need repairs made, for damp proofing and insulation. There seems to be an attitude in City Hall which finds money for such costly non-essential schemes but claims to be hands-tied when delivering services to people.”

Meanwhile, Cllr Diarmaid O Cadhla, a member of the People’s Convention who sits on Cork County Council, confirmed that a number of groups and individuals are coming together to launch a broad alliance of independent candidates in next year’s local elections to highlight the housing crisis.

“Housing Rights are a critical issue, in their fullest aspect, including lack of public and affordable housing, high rent costs, insecurity of tenancy, lack of enforcement of housing standards, evictions, the arrival of vulture funds and homelessness,” he said.

He said the broad alliance would also campaign for reform of local authorities in order that they would carry out their constitutional function as “a forum for the democratic representation off local communities”.

The new initiative, which will be called the “Housing Rights & Reform Alliance”, will also campaign “to end the corrupt influence of the political party elite who continually manipulate public policy in their own interests”, he said.