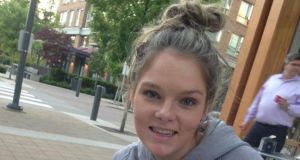 Olivia Burke was one of the six victims who died in the balcony collapse in Berkeley, California.

Her casket was driven from the hometown of her cousin Ashley Donohoe (22), north of San Francisco, passing over the Golden Gate Bridge on the way to the airport.

She was accompanied on the flight home by more than a dozen family members who attended the joint funeral service for the cousins in the town of Cotati on Saturday.

The remaining 34 students who were in the Berkeley apartment on the night of the tragedy were last night being flown home to Ireland on various flights in order to attend the funerals of the remaining four students in Dublin, which are taking place tomorrow and on Wednesday.

A number of other Irish J-1 students who were close to the six deceased were also returning home for the funerals.

The seven other students who were injured in last Tuesday’s tragedy remain in three hospitals in the Bay Area.

Hannah Waters and Aoife Beary are being treated in Highland Hospital in Oakland; Clodagh Cogley, Niall Murray and Sean Fahey in the Eden Medical Centre in Castro Valley; and Jack Halpin and Conor Flynn who are in John Muir Hospital in Walnut Creek. The conditions of the injured vary with Ms Waters and Ms Beary in the most serious condition, though neither are any longer said to be in a life-threatening condition.

Mr Halpin and Mr Flynn are recovering well, according to Minister of State for the Diaspora Jimmy Deenihan, who visited the hospital on Friday.

Their injuries and post-surgery conditions means that they might not be able to travel for a few weeks, or next week at the earliest.

The others are said to have injuries which may require weeks and in some cases many months of healing and rehabilitation.

The families are weighing up whether to remain in the Bay Area, where medical treatment may be better than Ireland. This could result in a shorter recovery time, however, to return to Ireland may bring the added comfort of being close to family and friends at home.

The six students were killed and seven injured when the fourth-floor balcony they were standing on collapsed at the Library Gardens student accommodation centre in downtown Berkeley.