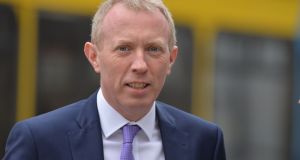 Fianna Fáil leader Micheál Martin has moved to reassert his party’s position on Brexit after one of his senior TDs accused Taoiseach Leo Varadkar of failing “to engage in basic diplomacy”.

Timmy Dooley, the Clare TD and communications spokesman, tweeted earlier on Tuesday that a “standoff” with the UK was a “direct result of Taoiseach Varadkars (sic ) failure to engage in basic diplomacy over the past 2 years”.

At the time of the tweet, Mr Varadkar had not yet spoken to Boris Johnson, the new British prime minister, although the pair spoke later on Tuesday morning.

“The Governments (sic) lack of experience and arrogance will hurt Ireland in the coming months,” Mr Dooley added in the message, which he later deleted.

Mr Martin later posted his own tweet, in which he said: “To be absolutely clear; the refusal by PM Boris Johnson to engage with European leaders and our Taoiseach without pre conditions on the issue of Brexit is unacceptable and is not within the realms of normal diplomatic or political behaviour.”

Other senior Fianna Fáil figures expressed anger with Mr Dooley, and said Mr Martin had no choice but to publicly upbraid him. Mr Martin spoke to Mr Dooley by telephone on Tuesday, party sources said.

Mr Dooley’s comments led to criticism from Fine Gael, Labour and Sinn Féin. Fine Gael senator Neale Richmond said they “have already been seized upon by the arch Brexiteers and the hard Tory right in England who are delighted to see a weakness in what has been a united Irish front until now”.

Sinn Féin’s David Cullinane said Mr Dooley and Fianna Fáil were “full of inconsistencies when it comes to Brexit”.

“Giving succour to Boris Johnson and the hard right and staunch Brexiteers in the Tory party is hardly acting in Ireland’s interest. Strange move and bad politics.”

Labour leader Brendan Howlin said: “This is not the time for playing politics. The risk of a hard Brexit has never been higher. Our focus should be on preparing for the potential economic shock.”

In a statement, the Independent Alliance — which comprises Ministers Shane Ross, Finian McGrath, Kevin “Boxer” Moran and John Halligan — called on “all parties and Independents in the Oireachtas to clearly support the Government position on Brexit”.

“This is a crucial time for our economy and political relationship with the UK. It is vitally important that the UK goes back to the Withdrawal Agreement it agreed with the EU,” Mr Halligan said.

“The only way forward is the withdrawal agreement. This policy has been agreed by all parties in the Dáil and it is vitally important that we all stay united on this on behalf of the people of Ireland.”