Fianna Fáil steps up preparations for an early election 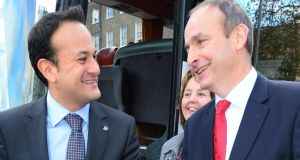 Fianna Fáil is preparing for the prospect of an early general election in the first half of next year as an increasing number of TDs and candidates believe the Government will fall by the spring.

The Irish Times has learned that the party’s national constituencies committee has decided to prepare for a general election from next January onwards.

Party leader Micheál Martin and those around him, however, maintain that they will see the confidence-and-supply deal with Fine Gael, due to expire in late 2018, through to its conclusion.

But Mr Martin was asked at an internal party meeting this week why general election preparations were being discussed instead of those for the local and European elections in early 2019.

He was asked, given the commitment to the confidence-and-supply deal, if it could be taken that Fianna Fáil was prioritising the local and European elections.

“He said: ‘No, you cannot take that,’ ” said one source. “He was very careful in his language. He said we are running all our election preparations simultaneously.”

While Mr Martin and senior party figures say the deal to facilitate the Fine Gael-led minority Government will run to completion, election preparations have significantly stepped up in Fianna Fáil, with selection conventions due to begin in the coming weeks.

Party sources do not believe an election is imminent, however, but say their sense is Fianna Fáil has entered into a 12-month cycle towards a contest.

“Any party worth their salt, given the instability of the last few months, would be getting ready,” said one source. Fine Gael has also held one selection convention.

The Fianna Fáil national constituencies commission is tasked with preparing the ground for an election, including identifying candidates and deciding what strategies to pursue in certain areas, such as the number of candidates who will stand. It also organises selection conventions and adding to party tickets.

The identity of its members is a closely guarded secret and is even kept from senior TDs but it has concluded that Fianna Fáil has to be ready for a general election from the beginning of next year.

A string of controversies in recent months, such as those involving Garda whistleblower Maurice McCabe, Garda Commissioner Noirín O’Sullivan and the appointment of former attorney general Máire Whelan to the Court of Appeal, have put a strain on the deal with between Fianna Fáil and Fine Gael.

The election of Leo Varadkar as Fine Gael leader and Taoiseach has also sharpened exchanges between the two parties, such as Mr Martin criticising Mr Varadkar over his comments that the Garda Commissioner should examine evidence given by members of the force at the Jobstown trial.

“Nobody thinks this will go the distance,” a member of Mr Martin’s frontbench said. “The election will be late spring or early summer next year.”