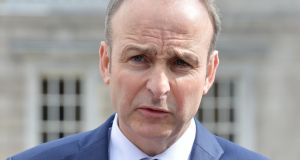 A group of Fianna Fáil TDs, including members of Micheál Martin’s front bench, have said the party should be open to coalition with Sinn Féin.

Their statements are in contrast to the party leader’s strong position that he will not enter power with Sinn Féin and indicate divided views in Fianna Fáil.

However, a significant number of TDs who spoke to The Irish Times were also strongly against such a move. Sinn Féin has indicated it wanted to enter government as a junior coalition party but ruled out supporting a minority government.

Fianna Fáil spokesman on foreign affairs Darragh O’Brien said nothing should be “written off” such as coalition with Sinn Féin or Fine Gael.

“We are in politics to implement Fianna Fáil policies and the best way to do that is to be in government,” Mr O’Brien said. “Should we be the bigger party, then we should look at all options.”

Others said coalition is possible if Sinn Féin leader Gerry Adams stands down, which Galway East TD Anne Rabbitte said would be a “game changer”.

“There would have to be a change of leader,” she said. “Under the current leadership, no way.”

‘Blood on their hands’

Kildare South TD Fiona O’Loughlin said Mr Martin has been clear, but added: “If we had a situation where they didn’t have TDs with blood on their hands, it might be a different story. It certainly wouldn’t be on the cards at this particular time but, down the line, you couldn’t rule it out.”

Cork East TD Kevin O’Keeffe said: “The time has come to bite the bullet. The most important thing is we fight the next election as a single party, but after that anything is possible.”

Roscommon TD Eugene Murphy said “whatever the electorate decides, we will have to deal with”.and if that meant having a serious discussion with Sinn Féin, then yes.”

James Lawless of Kildare North said it was “arrogant or presumptuous to rule anything in or out”. He said this was the “era of democratic politics on an all-island basis” and “it should be based on policy and political alignment rather than history”.

Kerry TD John Brassil said he would have “great difficulty” with Sinn Féin’s economic policies but “wouldn’t rule it out”. “The electorate will be telling us what they want,” he said.

Other TDs including Niamh Smyth and Brendan Smith of Cavan-Monaghan are strongly opposed, as is Mayo TD Lisa Chambers, who said Mr Martin had left “no ambiguity” in his position.

Declan Breathnach of Louth is a “strong believer” that the IRA “haven’t gone away”. “Until I am fully satisfied they have come into democratic politics, I wouldn’t be in favour of them in coalition,” Mr Breathnach said, but added it could not be ruled out in the future.