Farmers plough their own furrow as beef dispute drags on

At the National Ploughing Championships, the main focus is on finding common ground 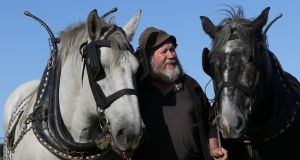 Jerry Wheels from Tralee, Co Kerry, with horses Larry and Elton, on day one of the National Ploughing Championships in Ballintrane, Fenagh, Co Carlow. Photograph: Nick Bradshaw for The Irish Times

There was plenty of skilled, straight ploughing on display on the fields in Co Carlow on the first day of this year’s National Ploughing Championships.

Off the fields, in the political negotiations around finding a solution to the bitter dispute over what farmers are paid for beef, some are ploughing their own furrows – and not in a straight line to other farmers.

The field of negotiation has been turned up in messy fashion by a splintering among representative groups that has raised questions around whether Irish farming is the unified political force it once was.

After hours of protracted negotiations and sleepless nights over the weekend at “Ag House” – the Department of Agriculture’s Dublin HQ – a deal that would end the pickets at meat processing plants was agreed, only for one of the groups representing beef farmers later to take a neutral position on it.

Independent Farmers of Ireland said on Sunday evening that it was neither accepting nor rejecting the deal. This was a decision that “has to be taken by all the peaceful protesters at the factory gates”, the group said.

In Carlow, there was a feeling amongst some of the other groups that a type of populist or even mob rule has taken over the process of negotiating on behalf of Ireland’s farmers, undermining the efforts and the livelihoods of rural people banking on the lifting of the pickets and processing machines starting up again.

One farming representative at “the Ploughing” likened the splits, in hyperbolic terms, to those of the republican groups of the Troubles years, and the potential divisions to the fratricidal in-fights they spawned.

Another described the splintering amongst the farming community – which started with the Beef Plan Movement that began the pickets at meat processing plants – in uncharitable Monty Pythonesque terms to managing divisions between the People’s Front of Judea and the Judean People’s Front.

Day one of the National Ploughing Championships VIEW NOW

Everyone that has come in here has been saying that these protests need to end, we have cattle to sell

For the country’s largest farming group, the Irish Farmers’ Association, the process of negotiation has been complicated by the appearance of new faces in the negotiating room.

Several farmers pointed to the vote in favour of continuing the picket at the ABP plant in Cahir, Co Tipperary as not being representative of the views of thousands of farmers in a major beef-producing county.

“I have been here since 8am this morning and everyone that has come in here has been saying that these protests need to end, we have cattle to sell, we need to be able to sell the cattle,” said Angus Woods, the IFA’s national livestock chairman and candidate to become its president, at the group’s packed stand in Ballintrane.

Woods acknowledged that it “always makes things tougher” when there are more people in the negotiating room “fighting for different little agendas”, but he said that people had to be realistic.

“There’s plenty of people out there more than willing to do the populist thing, to do the Donald Trump, to do the Boris Johnson, telling people everything they want to hear. But the leadership is about telling people what they need to hear and that’s different,” he said.

Social media has been blamed for the spreading of false information about what farmers were receiving for their cattle overseas and raising expectations amongst some farming factions to unrealistic levels.

“A lot of farmers feel they read something and they think this is awful. It is very difficult to get back and explain to them what actually is the situation,” said Woods.

Almost every farmer The Irish Times spoke to in Co Carlow recognised that nobody could get everything they wanted from the deal and felt some groups were unwilling to accept the view of the consensus.

“It is not like herding cats. It is like any agreement or arrangement: life is full of compromise,” said Pat McCormack, president of the Irish Creamery Milk Suppliers Association (ICMSA).

Despite the divisions, the political parties still see the power of the farming community; those parties certainly spied plenty of potential voters among the 102,500 who attended the first day of the championships.

“Once you were dealing with two groups; now you are dealing with six in terms of the farming agenda,” said Fianna Fáil deputy leader Dara Calleary, in between chatting to supporters in the party’s busy tent.

“It makes it more challenging, definitely, but the key demands and key pressures are the same.”

While Government figures find it disappointing to see hold-outs to a deal negotiated in good faith, others accept that the farming community is enduring the same fracturing being experienced in politics and elsewhere in public life.

“Have farmers lost power? Not as an overall sector, but it depends how they work together themselves,” said Fine Gael Minister of State Damien English, standing in the party’s tent amongst farm supporters.

“If you have got six or seven voices around the table where it used to be only two or three, it is harder to come to arrangements and to reach deals.”

1 Coronavirus: Varadkar returns to practising medicine to help during crisis
2 Donald Trump’s clown car administration has put the fear in all of us
3 Coronavirus: Number of Irish cases nears 5,000 as 21 further deaths confirmed
4 Robbie Lawlor profile: A feared criminal with a long list of enemies
5 Fewer deaths in Veneto offer clues for fight against coronavirus
Real news has value SUBSCRIBE