McGann family, in remarks issued through Sinn Féin MEP, say they ‘condemn all forms of violence’ 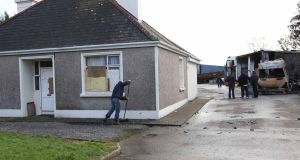 Friends and neighbours help clean up the debris at the house in Strokestown, Co Roscommon, which was the centre of an eviction last week. Photograph: Brian Farrell

The McGann family who were evicted from a Roscommon farmhouse last week have issued a statement saying they have been overwhelmed by the levels of support they have received.

The eviction of farmer Anthony McGann, along with his sister and brother, from the house at Falsk, near Strokestown, was on foot of a court order with KBC having been granted a possession order.

The siblings are now back in the property and on Tuesday evening issued a statement through “their friend and former neighbour” Sinn Féin MEP Matt Carthy.

This is their statement:

“The McGann family from Strokestown, County Roscommon, who were subjected last week to a forced eviction by a Northern Ireland based security firm acting on behalf of KBC Bank, have issued a statement in response to the deeply distressing events they have been forced to endure over recent days.

“Our family has been overwhelmed by the levels of support we have received and we wish to pay special thanks to our neighbours and friends who have greatly helped us during a very traumatic time. We would also like to pay tribute to the people from across the four corners of Ireland whose sympathy and solidarity has been of great assistance in our time of need and to the people who travelled long distances to stand in solidarity with us.

“The forced eviction from our home has left our family shocked by unforeseen events that were thrust upon us. Our ordeal has been further compounded by the inaccurate and ill-informed media coverage of our eviction, and the subsequent events that have occurred. We wish to make clear we condemn all forms of violence and want to see the rule of law upheld but we have also been deeply upset by the use of inflammatory language that has characterised much of the media reportage.

“We believe our plight has been exploited by some wishing to further their own narrow agendas and we were particularly disappointed at comments made today by An Taoiseach Leo Varadkar during Leaders’ Questions in the Dáil. His remarks, we believe, are a deliberate attempt to deflect attention from some of the very serious issues relating to our eviction. He has yet to adequately respond to the actions of unidentified security personnel who forcibly, and with considerable violence, removed our family from our home in front of a massive Garda presence that oversaw the eviction nor has he responded to concerns about the legality of the eviction notice.

“The McGanns have asked the Taoiseach to refrain from making comments that further compound their distress and in conclusion to their statement they say their case is with two firms of solicitors who are now acting on their behalf and that matters relating to their eviction will be heard before the courts in due course. Meanwhile they appeal for their privacy to be respected as they resume their preparations for Christmas. As this is now a legal matter the Mc Gann family or anybody connected to them will be making no further comments it may be prejudicial to future legal proceedings.”