Relatives of Christopher Leonard, who died in 1913, want headstone for unpurchased plot 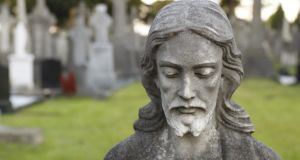 Some time between 9am-10am on January 4th, 1913, Christopher Leonard (24), a labourer and married man with five children, climbed down a manhole at Dublin’s Poolbeg chimneys and never returned.

Mr Leonard was part of a group of men engaged in the cleaning of a sludge pit at the Dublin Corporation Main Drainage Works at the Pigeon House.

Climbing down a ladder to retrieve a light they had been using to work, Mr Leonard collapsed.

The men attempted to go to his assistance and were immediately overcome by noxious fumes but managed to retreat.

After Mr Leonard’s body was retrieved, a coroner said he had died from asphyxia caused by the inhalation of sulphuretted hydrogen gas.

Mr Leonard’s family could not afford to buy a grave for his burial, but during this period Glasnevin Trust, which runs Glasnevin Cemetery, offered a “pay later scheme” for families who couldn’t afford graves at the time of burial.

This was “widespread”, so the practice was abandoned. Mr Leonard’s remains have therefore lain in what is colloquially known as a “pauper’s grave” since then.

Recently, his grandson, Thomas Leonard, having investigated the genealogy of his family, learned of his grandfather’s whereabouts and sought to have a headstone erected.

His daughter, Karen Leonard, says Glasnevin will not permit the erection of a headstone, and the plot, which contains the remains of two other “paupers”, is up for sale at a price of €2,030.

“My father was quite upset about that,” she says. “I asked them about putting up a stone with his name on it, because that’s all my father wants, but they told me they were selling it.

“My father has had a stroke and doesn’t work. My mother is looking after him so they are not in a position to buy the grave.

“They’ve put it on hold for a year. We would hope some sort of resolution can be reached between now and the end of that period.

“We went down to the council to see if there was some sort of a fund but there was no luck there.”

Glasnevin Trust says many of those who availed of the “pay later” service failed to pay for graves, which led to many of them being occupied but with ownership remaining with the trust.

“If these graves went unpurchased for 100 years they became available again for general sale,” it says.

“As a mark of respect for the remains of those already interred in the grave, the remains were not disturbed.”

“Before any ‘gone over grave’ is sold, it is Glasnevin Trust’s policy to ensure that potential buyers are made fully aware of the grave’s history and the remains of the original occupants are not disturbed,” it says.

“The particular family who have raised the issue has been offered to buy the grave but declined to do so.

“Therefore, out of respect for those others buried in this particular grave, Glasnevin Trust cannot permit the erection of a headstone for one particular family unless they decide to purchase the grave, in which case they will be granted full ownership.”

Sources at the graveyard say the “majority of graves” in Dublin and Glasnevin are “gone over graves” in which people were buried for free many years before.

“There are thousands of them, so it’s rare to find a grave that is brand new.”