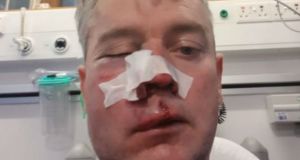 Daniel Sweeney was hospitalised when he was attacked after a match.

FAI chief executive John Delaney has agreed to meet with representatives of the Irish Soccer Referees’ Society (ISRS) next week to discuss the issue of attacks on referees during games.

Paul O’Brien, president of the ISRS, will meet with two senior FAI officials on Thursday, and he will raise what he said was the need for stronger sanctions for anyone who assaults or verbally abuses referees.

Mr O’Brien told The Irish Times he would be bringing any proposals for reforms from the FAI “back to the membership” of the referee body before agreeing to anything.

Calls for heavier sanctions against football players and supporters who assault referees followed the recent attack on a match official, who was left with a broken jaw and fractured eye-socket.

Referee Daniel Sweeney was assaulted after a senior match between Horseleap United and Mullingar Town on Sunday.

Mr O’Brien said the FAI needed to review its sanction guidelines, noting that at present any player who assaulted a referee was automatically suspended for one year. “That is not strong enough, that’s not sending a message,” he said.

He also urged the sport’s governing body to set up a respect and education campaign for the proper behaviour at games.

Mr Sweeney’s jaw was broken in two places, his eye-socket fractured and he had to get multiple stitches in his nose. It is understood the attack took place in a car park after the game.

Mr Sweeney, a married father-of-two in his mid-40s, was taken to the Midland Regional Hospital in Tullamore. He was transferred to St James’s Hospital in Dublin on Monday.

“The pictures don’t do justice to his face,” said Paul Malone, the secretary of the referees’ Midlands branch. “He is not allowed eat or talk. He can drink through a straw for the time being. In my refereeing career, I have never seen this kind of assault. It’s an absolute disgrace and all over a game of football.”

Mr Malone, who said he is a friend of Mr Sweeney described him as a man who always calm. “He’s a nice guy. I was chatting to a few people at the match who said Daniel had done nothing wrong”.

Gardaí said officers were called from Tullamore shortly before 1pm to the scene of a public order incident at a football club in Horseleap.

“It’s understood a match referee was physically injured when a disturbance broke out during a football match.”

No arrests have been made to date and enquiries are ongoing, a spokesman said.

In a statement the FAI said it did not “condone any abuse - verbal or physical - towards match officials,” and takes such attacks “very seriously”.

The organisation said it would assist the Garda investigation into the assault of Mr Sweeney “in any way it can.”

The comments followed the abandonment of seven games in the past six weeks and noted how coaches and parents of children are also increasingly becoming involved in fights “ending with them verbally or physically striking out at young players”.

Secretary of the Combined Counties Football League Chris Hand said there was no room for violence in sport. The league administers the junior leagues in Laois, Longford, Offaly and Westmeath on behalf of the FAI.

Mr Hand told RTÉ that the individuals involved in the assault of referee Daniel Sweeney have been identified, suspended and will be subject to a disciplinary hearing. “This will be followed up with the strongest possible action,” he said.

Parents encouraged to ditch the car for ‘cycle bus’ 20:32
Students to wear face coverings in lectures where two metre distance not possible 20:28
Gardaí find potential breaches of Covid-19 rules in 24 pubs 20:15
Man charged with murder of woman (20) in Newry 20:04
Irishman in Malta postpones trip to Dublin after green list cut 20:02