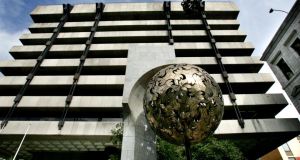 The Central Bank has set targets for the end of March 2014 for banks to offer sustainable solutions to 70 per cent of customers in arrears of more than 90 days. Photograph: Matt Kavanagh

An extension to the mortgage term is the most frequent permanent solution agreed between Irish banks and mortgage holders in trouble, new figures from the Department of Finance show.

The figures show that 700,000 of the 1.9 million principle private residences in Ireland are under mortgage to the six main banks – AIB, Bank of Ireland, Permanent TSB, ACC, KBC Ireland and Ulster Bank. The remaining 1.2 million homes are either mortgaged with other lenders or are mortgage-free.

The data, provided by the banks to the Department of Finance and which is unaudited, shows that more than 71,000 mortgages have been restructured. The figures, however, include the restructuring of some mortgages that had never fallen into arrears.

Where banks and householders had agreed a permanent restructuring of mortgages, an extension of the term of the mortgage was the most frequent solution agreed. This applies to 35 per cent of all permanent solutions agreed. While the individual will retain ownership of the home, many boom-time buyers with already lengthy mortgage terms may be past retirement age while still making repayments.

Interest only
The second most frequent permanent solution agreed with lenders is interest only, for a period. This was agreed with 22 per cent of homeowners. Arrears capitalisation accounted for 15 per cent of solutions, and split mortgages just 6 per cent.

The department’s figures come after targets set by the Central Bank in September requiring Ireland’s main banks to have “concluded arrangements” with 15 per cent of customers in arrears of 90 days or more by the end of December.

The Central Bank has also set targets for the end of March 2014 for banks to offer sustainable solutions to 70 per cent of customers in arrears of more than 90 days and concluded solutions to 25 per cent.

The Department of Finance said while the banks had been “slow to engage with the problem of arrears” and had spent time “building capacity” to tackle the problem, yesterday’s figures were an indication they were beginning to “get their arms around the problem”.

Absent from the figures, however, are the number of repossessions. A department spokesman said he hoped these figures would be included in future bulletins.

Of the inclusion by banks of mortgages that have not fallen into arrears in their restructuring figures, the department said some mortgages were being restructured before falling into arrears “and that’s what we want”.