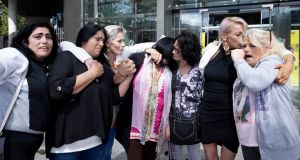 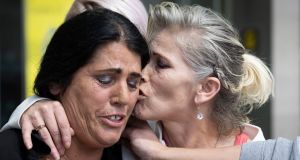 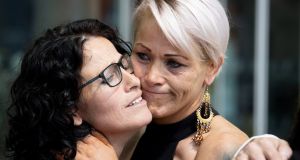 Sisters Anne O’Reilly and Bridget O’Reilly outside the Central Criminal Court in Dublin after their father James O’Reilly was jailed for 20 years. Photo: Tom Honan for The Irish Times. 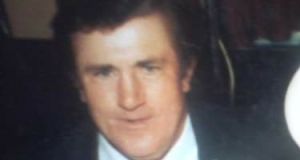 James O’Reilly: convicted of 58 counts of rape and nine counts of sexual assault following a 27 day trial at the Central Criminal Court.

A 75-year-old man has been jailed for 20 years for raping and sexually abusing his sister and seven daughters over a 23 year period.

The abuse occurred against a backdrop of squalor and poverty. As well as sexual abuse, his victims were subject to physical beatings, starvation and degradation.

In 1988, O’Reilly raped one of his daughters, causing her to become pregnant. She gave birth to a daughter the following year.

At the time O’Reilly told his daughter to allege she had been raped by another man. He continued abusing her and only stopped when she threatened him with a knife.

Later DNA tests confirmed he was the father, a factor which was instrumental in securing his conviction.

One victim said she was starved and forced to beg for food outside while another said she did not know what a Christmas present was until she was an adult.

Outside the court on Monday morning, O’Reilly’s seven daughters embraced and cheered as they celebrated what one called “the end of a nightmare”.

They called for women who have been abused to come forward, particularly women from the Travelling community. “We’ve been silent about this for too long,” said one victim.

“I would advise people, if the person is not deceased, to come forward. It’s never too late,” said another. “We’ve been living through this our whole lives. My whole life was destroyed because of this. I’m just getting on with my life now.”

In a statement read on their behalf, the women asked how the abuse was allowed continue for so long. “How could schools, social workers, medical professionals and others who have a so called duty of care turn their back time after time as the evidence was hitting them in the face.”

They asked if the same would have happened to a settled family. “They were vulnerable Traveller children forced to live on the edges of Irish society. Already looked down on, discriminated against and denied their basic human rights. Does this denial of their rights also extend to their right to protection as children?”

During his trial, the prosecution contended O’Reilly’s offending lay in the most serious category and warranted a life sentence. The defence were able to offer little mitigation, aside from citing O’Reilly’s age and health problems.

O’Reilly continues to deny any wrongdoing and claims the DNA tests showed the child was his granddaughter rather than his daughter.

In weighing up the sentencing options, Mr Justice Tony Hunt said the difference between a life sentence and a lengthy but finite sentence may be academic given O’Reilly’s age.

He said he wanted to construct individual sentences for each offence so that “each victim can perceive a distinct sentence for the offending which was carried out on them.”

The judge imposed sentences ranging from two years to   20  years, all to run concurrently.

He said he was giving the accused “as much light at the end of the tunnel as I can leave given horrific factors of this case.”

Mr Justice Hunt also paid tribute to the women who he said dealt with the case with “courage, dignity, remarkable stoicism and an occasional flash of good humour.”

The abuse caused incalculable harm to the women, he said, adding he was not sure they would ever completely overcome it. He wished them well for the future.

In her victim impact statement, which she read out in court, Philomena Connors (35) said she sometimes thinks why did her mother have her and wishes she had never been born. She said she always had emptiness in her heart and she still has to this day.

O’Reilly’s sister, Christine Rooney (56), said she felt like he had stolen her childhood and education. She said these were things she could never get back.

Ms Rooney said her brother thought he could control her with fear and it worked. She said he would not feed her and she had to beg for food outside.

“He will not beat me,” Ms Rooney said. She said in her view he should never be free to cause the pain and misery he inflicted on her to anyone else.

His daughter Helen O’Donoghue said she had no education, no life and her father took everything from her. She said she has put up with being raped, starved and beaten all her life.

Ms O’Donoghue said she feels suicidal at times and it is her children that keep her going. She said she has never had the love of parents to this day.

Kathleen O’Driscoll said she can remember her father abusing her from her earliest childhood memories. She said she prayed each night that she would not wake up.

Ms O’Driscoll said her father threatened that if she told anyone about the abuse, he would cut her throat and the throat of her person she told. She said she had watched him cut the throats of goats.

Margaret Hutchinson said the abuse was a constant part of her life. She said her father told her if she ever told anyone about the abuse he would kill her and her mother.

Ms Hutchinson said her father took her childhood and her innocence. She said she had no friends and only went to school for her Communion and Confirmation.

She said her father threatened that he would make her pregnant and that no one would marry her. She said that when she became pregnant aged 16, she knew the threat he made was now real.

Mary Moran said her life was never ever going to be the same again. She said she struggles to wake up every morning.

She said the pain is always in her heart and it never leaves. She said there are times when she does not even want to leave her house.

She said her father destroyed her life and took everything from her. She said she hates her mother more for not stopping him.

Anne O’Reilly (40) said the only reason she has not killed herself is because she loves her children so much. Ms O’Reilly said when she goes out, she runs everywhere just to get home. She said she would have loved to go to school and could not even write her name until she was aged 16.

Brigid O’Reilly (37) said her whole childhood was taken away from the start. She said she hears his voice and has flashbacks daily. Ms O’Reilly said she is afraid to go asleep and will stay up for days at a time. She said she locks herself away and goes days without eating.