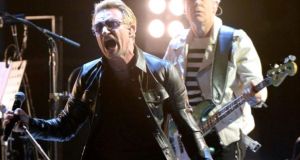 U2 perform in Vancouver at the beginning of their new world tour.

Former U2 manager Paul McGuinness has said the band erred in giving away its last album to all iTunes subscribers whether they wanted it or not.

Mr McGuinness told The Irish Times that he would have handled things differently if he had still been in charge of the band when they released Songs of Innocence in September of last year.

In an interview with Paris correspondent Lara Marlowe, he said: “I think it was positioned wrongly. If they’d made it ‘tick this box and you can receive the U2 album’, it would not have given offence. People were unhappy about having something arrive that they hadn’t asked for. It was easy enough to delete... But I think that it should have been handled differently.”

The release of Songs of Innocence was a joint operation between U2 and Apple and they described it as the “largest album release ever” with it being delivered to some 500 million iTunes customers. To date some 30 million subscribers have downloaded the album.

However, the band were criticised by many iTunes subscribers who were not fans of theirs and also by musicians such as Paul Brady who criticised their decision to give the album away for nothing, though the band themselves were paid by Apple.

Bono later apologised admitting that the band got “carried away with ourselves. Artists are prone to that kind of thing. Drop of megalomania, touch of generosity, dash of self-promotion, and deep fear that these songs that we poured our life into over the last few years mightn’t be heard. There’s a lot of noise out there. I guess we got a little noisy ourselves to get through it.”

McGuinness is now working with film director Neil Jordan and writer John Banville on a television crime series which will be set in the south of France.

McGuinness revealed that he was fond of the four members of the band to “different degrees”, but “we had our protocols. There was quite a lot of etiquette. We were quite formal in our dealings with each other.”

He also revealed that the band’s decision to move one of their companies to the Netherlands in 2006 was not based on his advice.

“First of all, I don’t give U2 tax advice. I never did. There is an expertise in Holland, a particular accounting practice that is used by the Rolling Stones that specialises in the collection of royalty income on a worldwide basis. That was the real reason for it.”

You can read the full interview here.