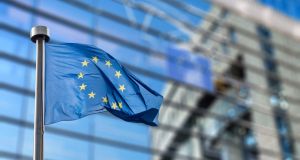 The European Commission’s office in Belfast closed at the end of January when the UK left the EU. Photograph: Getty Images

The EU should re-establish a diplomatic “presence” in Northern Ireland post-Brexit, according to a report by the research initiative The UK in a Changing Europe.

It is one of 80 recommendations contained in its report, published on Tuesday, on the governance of Northern Ireland after Brexit which is co-authored by Dr Katy Hayward, Professor David Phinnemore and Dr Milena Komarova from Queen’s University, Belfast.

This “presence” need not necessarily be a public-facing office, the report states, but it should “contribute, as appropriate, to the implementation of the [Northern Ireland] Protocol but also to fill the liaison/communication gap left by the loss of the Commission Office in Belfast.

“This will aid understanding and appropriate sensitivity at EU level,” the report’s authors wrote.

The European Commission’s office in Belfast closed at the end of January when the UK left the EU.

Requests from the North’s four pro-Remain parties – Sinn Féin, the SDLP, Alliance and the Greens – and the EU were rejected earlier this month by British cabinet office minister Michael Gove who said he did not accept any permanent EU presence was required in Northern Ireland.

The UK in a Changing Europe carries out research into the relationship between the UK and the EU. It is funded by the Economic and Social Research Council (ESRC) – which is part of UK Research and Innovation – and is based at King’s College, London.

The report is the final publication of a research project, Anticipating and Meeting New Multilevel Governance Challenges in Northern Ireland, an 18-month long study of the democratic implications of the Northern Ireland Protocol, which is part of the Brexit Withdrawal Agreement.

The report’s authors found that Northern Ireland faces a “serious democratic deficit” as a consequence of Brexit. Under the Protocol, they found, the North will continue to be a “rule-taker” from the EU with no formal representation at that level, and its elected representatives will have no capacity to directly shape EU decisions and limited scope to scrutinise them in advance.

Its recommendations include that the Northern Executive should be consulted by the UK government on Brexit-related issues affecting Northern Ireland, and that the Executive should act on establishing a consultative forum of representatives of civil society to address issues around the Protocol.

It also suggested that the North South Ministerial Council should be given a formal role to monitor the implementation and the impact of the Protocol and, under the terms of the Belfast Agreement, its views should be “taken into account and represented appropriately at relevant EU meetings.”

Priority should also be given to “equipping and preparing the Office of the NI Executive in Brussels for a new and, if anything, more important role under the Protocol”.

“The recommendations are for generally modest initiatives and developments,” said lead researcher Dr Katy Hayward, “but each one is a small step towards improving the means by which Northern Ireland can be better governed, even though its capacity to determine the policies that affect it has been undeniably diminished.

“Upholding democratic legitimacy in principle and in practice is particularly important for a region with a still-fragile peace process,” she said.

The director of The UK in a Changing Europe, Professor Anand Menon, said there was a “growing awareness that the Northern Ireland Protocol is more important than its 15 pages would suggest.

“Concerns about the capacity to shape UK post-Brexit policy are, as we know, not confined to Northern Ireland.

“There are many lessons that can be drawn from this report for all the devolved regions and nations of the UK,” he said.

Over half of Northern Ireland’s Covid-19 fatalities are care home residents 16:53
Robbie Lawlor ‘met by a gunman’ when he attended Belfast appointment 16:50
Outdoor children’s playgrounds set to reopen from Monday 16:38
Man alleged to have interfered with Co Westmeath heritage area 16:07
Policing Authority says some gardaí reluctant to arrest for domestic violence 15:16