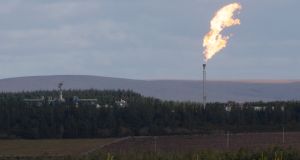 The Environmental Protection Agency (EPA) is prosecuting Shell E&P Ireland for breaching its emissions license at the Corrib gas refinery in north Mayo.

A summons was issued by the EPA late last week, The Irish Times has learned.

The prosecution relates to the EPA’s six-month investigation into an intense flaring incident at the refinery on December 31st, 2015.

Residents who had experience of test flaring over the past year had described as “frightening” the activity, which lasted for about 30 to 40 minutes, from about 8.15pm on New Year’s Eve.

They reported burning smoke and a ball of fire which “lit up the sky” and which was accompanied by a “low loud rumble like a supersonic boom”.

Under the project’s integrated pollution prevention and control (IPPC) license, awarded by the EPA, flaring can only be used “for safety reasons or for non-routine operational conditions” as the practice contributes to greenhouse gas emissions.

Shell acknowledged that the December 31st flaring was “exceptional”, and promised to “take all measures to minimise further occurrences”, which it said would be “intermittent in the coming days” as first gas was brought ashore.

However, the EPA decided to investigate the incident.

Residents who subscribed to text alerts from Shell were “not always informed”, she said.

The EPA has confirmed it has kept a record of reports from the gas developers of further flaring incidents.

On conviction on indictment, the fine is up to €15,000 or imprisonment for no more than 10 years, or both fine and imprisonment.

The Office of Environmental Enforcement will also seek to recover the full costs of an investigation, detection and prosecution of an offence.

Shell E&P Ireland confirmed it had received a legal summons from the EPA “alleging breaches of our industrial emissions licence”.