No hatred on display as occasion is marked with tea, soccer and a lilting brass band 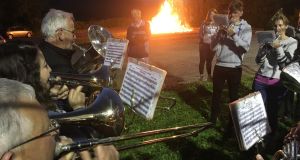 A single union flag fluttered from the Orange Hall gable as cars lumbered on to the grass verges on both sides of the small country road, disgorging families come for the Eleventh night celebrations.

“You’re very welcome,” said a smiling Jim Patton, custodian of a plastic sweetie box on the entrance table. “Aye, whatever you feel like,” he replied when asked how much.

Inside the hall of Roughan Loyal Orange Lodge (LOL 1031), a simple and sparsely decorated, small wooden-floored room like any well-worn village hall anywhere in Ireland, there’s a framed black and white photograph on the wall.

Taken in the countryside in 1904, it is in the style of a passing out class. It shows the members of the Roughan (pronounced ruck-in) Silver Band – country men in suits, wearing straw boaters and bowler hats, clutching their prized musical instruments and looking slightly stiff in an Edwardian kind of way.

“That man there,” says Jim Patton pointing to one figure, “that would be a great uncle of mine, Billy Montgomery.”

Eleventh night at Roughan is about family, community, tradition and allegiance – to God and to country (a complex mix of being Irish from Northern Ireland and proud of it, of feeling British as well but stoutly supporting at least one cross-Border institution, the Irish rugby team).

Over the course of five hours there on Tuesday evening, there was nothing ugly, no hate, spite or venom directed at anyone and no excesses. But there was healthy and robust competition on the 3G all-weather football pitch, opened exactly a year ago.

The Orangemen of Clogher Valley first mark the 12th of July celebrations with an Eleventh night football match between the two districts, Fivemiletown (this year’s hosts) and Annahoe.

Annahoe were hot favourites to win, especially after last year’s demolition, and they started well. A wiry young man, Wee Sammy, was like a demented ferret in the goalmouth, cracking a screamer off the upright within minutes and testing Fivemiletown’s stand-in goalie for the night, Ian McClung, whose heroic saves surprised no one more than himself.

As the game progressed, speakers on the side of TJ Booth & Sons Collumbrowe Mills bright red lorry began blasting out Neil Diamond. 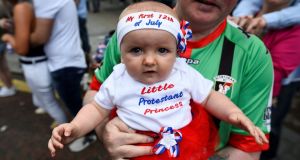 In Pictures: The Twelfth

The lorry changed its tune and began blearing out “We’re Not Brazil, we’re Northern Ireland”, the Northern Ireland football team’s Espana 82 supporters’ song (sang to the air of Mine Eyes Have Seen The Glory of the Coming of The Lord).

Football and the gospel

Fivemiletown was no pushover, however, thanks to a pair of Ashleys – Robinson and McFarland. Robinson got the equaliser and then put his team one up before McFarland got a third.

Wee Sammy was rewarded with a goal but it was to no avail. Honours this year were going to the hosts.

Pastor Roy Graham, a retired Baptist and Elim Pentecostal preacher, handed out leaflets and said a few words about football and the gospel. Local MP Arlene Foster, at ease and comfortable among her own, presented the shield and posed for team shots.

Chatting afterwards, she said that people needed to “dial down the rhetoric”, a reference to the bile flowing around the mountainous Eleventh night pyres in Belfast. “They need to remember this is a celebration and to be a celebration, you need to respect everyone.”

All around her, children scampered about the place, laughing, playing tag and tumbling. The bouncy castle was a winner with the face-painted tots. Older ones had a go on a mechanical bucking bronco.

Young dancers mounted TJ Booth’s lorry, all kilts, white socks and laced up dancing pumps, and performed sword dances, one hand on hip, the other arched above their head. Andy Steward would have had them on the White Heather Club were the Scottish variety show still going.

Men stood around talking rural matters; women caught up with friends too. A barbecue brazier belched out blue smoke and did a roaring trade in burgers and soft drinks.

The scene, more post-harvest village fate than Eleventh night to an outside observer, was serenaded by the Dergina Accordion Band playing It’s a Long Way to Tipperary and The Sash.

“It’s community, its family and its culture,” said District Master Mark Robinson, happy at the scene and the community effort.

At 10.30pm, they lit the bonfire, a 20ft tall mass of wooden pallets with no effigies or flags or anything that could cause anyone offence as men (and Foster, for a laugh) took turns at belting out rumbling rolls of the Lambeg Drum.

Nearby, the flag of Ulster and the Orange Order also flew.

As bright orange flames licked the darkening sky and billows of sparks had people scurrying, the Brackey Flute Band from Sixmilecross played in the Twelfth with a mix of When Johnny Comes Marching Home, So Many Lives and The Sash silhouetted against the inferno.

The embers dying, Roughan Silver Band emerged as from nowhere and, standing on some raised ground above the fire, played Edwin Firth’s Kenilworth. Their style was flawless, the sound, soft and lilting was more lament than march; more north of England colliery brass band melancholy than foot stomping Orange.

“I wish we had a better image,” said local organiser, goalie Ian McClung.

Yesterday in Glorious Twelfth sunshine, they marched into Dunwoody’s field, a grassy drumlin half a mile outside Clogher – 23 colourful banners, flute bands, accordion bands, pipe bands and silver bands – for the annual demonstration.

A demonstration – not a march – of who and what they are: a proud, warm and welcoming people, with a history and an allegiance they see intimately linked to their faith and life navigated through the scriptures.

The more things change, the more they stay the same, said the Rev Canon Maurice Armstrong, the keynote speaker. He delivered his sermon from the side of TJ Booth’s all-purpose lorry, transformed in appearance by bales of hay and bunting, milk churns filled with orange lilies, a dais draped in the Union flag and flanked by loyal banners from near and far, those who carried them and walked behind them satiated by cups of tea and sandwiches.

He took for his theme nothing so recent as King Billy’s victory of 1690. Uppermost in Canon Armstrong’s mind was October 500 years ago when Martin Luther nailed his 95 theses to the door of All Saints Church in Wittenberg.

“Luther was perturbed when he rediscovered a lost truth: the righteous are made by faith alone,” said Canon Armstrong.

In a world of earthquakes, wars and rumours of war, violence and terrorism – “so much that is due to the sin of mankind” – God was our strength and refuge. He remained sovereign over the world and “everything about our land and nation has to be rooted in the scriptures”.

More than 1,000 people lined Clogher’s main street, many in fold-away chairs or sitting on blankets for picnics, as the Orangemen walked past St Macartans cathedral and on out of town. About the same number came to Dunwoody’s field.

And then they went home, fortified and steadfast in their determination to keep alive that which matters to them.