Election 2020: Where the candidates stand on the Irish language 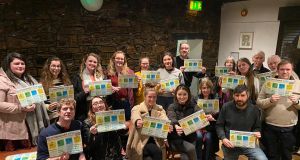 Conradh na Gaeilge activists and members of the public at a recent meeting in Dublin.

The Irish language is one of those policy areas addressed in election manifestos which will go largely untested by the time the first vote is cast this Saturday.

A few token utterances by party leaders aside, Irish has barely featured in the 2020 campaign and by the time general election hopefuls have had the last word on the headline issues, it is unlikely to have received much consideration outside of Raidió na Gaeltachta and TG4.

While rarely featuring in mainstream political discourse, campaigners say the continuing supply crisis in Irish-medium education and the persistent failure of the State to deliver meaningful protection for the language and her speakers will ensure that the issue will not go away for the next government.

Indifference to the sector is not limited to a political landscape dominated by English language media. This was witnessed again in recent days when voting cards featuring incorrect voter names were issued.

Almost 100 years after the foundation of the State and it is still beyond its capability to acknowledge the correct spelling of Irish names, highlighting again some would argue, an entrenched identity bias on the part of Ireland’s State apparatus.

Housing and childcare are always going to feature prominently in any election and the dominance of just two or three political issues in this campaign shows just how difficult it can be to find a space for other issues which happen to fall outside the mainstream election narrative.

“That is why we engage in a more direct approach where we engage directly with the candidates themselves.”

Individual candidates as well as political parties were asked to commit to four measures agreed by over 70 Irish language and Gaeltacht groups which, if enacted, they say will go someway towards reversing the decline of Irish.

1. The appointment of a senior Government minister with Cabinet responsibility for the Gaeltacht and the Irish language.

2. An investment of € 18 million in an Irish language and Gaeltacht plan to expand the use of Irish

4. Support for the strengthening of the Official Languages Bill and a commitment to honour the provision that 20 per cent of candidates recruited to the public sector will be competent in the Irish language.

How did the candidates respond?

Mr de Spáinn said the approach has been well received.

“We have had a very positive reaction. The vast majority of the parties and the candidates have given their support for most, if not all, of the commitments we were looking for,” he said.

“Not only were we asking people to raise the issues with candidates at the doorstep but we also organised Fóraim Gnímh or action forums over the last two weeks where we met with groups – large and small – to discuss how to engage the politicians and how to encourage more participation from the public as well.”

Conradh na Gaeilge has published a list of candidates and where they stand on the organisation’s commitments at cnag.ie/gaelvota.