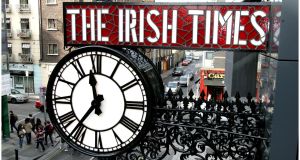 Irish Times journalists covered a wide range of subjects and topics in what was a very busy year in news. Photograph: David Sleator/The Irish Times

1. Fintan O’Toole had two pieces written depending on the outcome of the US election. He was ready to publish one within milliseconds of the official result…This is the ‘Trump version’ published at 8.08 am on Wednesday November 9th. http://iti.ms/2i2WKEQ

2. 32-year-old Siobhan Powell can’t walk, speak or eat solid food. Her exhausted, frustrated parents wanted to start a conversation about the lives of carers in Ireland. Her mother Johanne did so with disarming frankness in conversation with Rosita Boland. http://iti.ms/2hjWpJS

3. The skill of good reportage and thorough investigation is threaded through this piece by Peter Murtagh on the anatomy of a car insurance scam. http://iti.ms/2i33QJo

4. An opinion piece by investigative journalist Declan Lawn held the mirror up to everyone in the media world in the wake of Trump and Brexit:

5. A call for restorative justice; a compelling account of the on-going trauma of abuse. The author stressed, “there is nothing ‘historical’ about the child abuse I suffered 45 years ago - the kind your order now seems to want to forget all about. My anguish continues.” http://iti.ms/2i2XmKE

6. The Irish rugby team ended 111 years of hurt when they beat the All Blacks. Enough said. Gerry Thornley’s account of the match is of sporting history but it also comes with forensic detail in recounting the victory. http://iti.ms/2hjXXDP

7. Claire Woods affirmed the happy outcome to her unexpected and stressful pregnancy. She also provided captivating insights into why a woman would consider having an abortion though she wouldn’t have wanted to take that option. http://iti.ms/24oAfK0

8. This Fintan O’Toole piece encapsulated more than any other the depth of rancour and distrust at the heart of the English body politic that prompted Brexit. http://iti.ms/2i2RAsl

9. Sometimes it takes an outsider to provide proper context, as did Ken Early in acknowledging England supporters were the inheritors of a reputation they no longer deserved. http://iti.ms/2hjYi9z

10. All politics ultimately is local… Independent Alliance TD for Longford-Westmeath, Kevin “Boxer” Moran, delivered his maiden speech to a near deserted chamber as it neared midnight on day 56 of the new Dáil. Miriam Lord captured its significance delightfully. http://iti.ms/2i2Qe0C

11. More than 1,000 homeless families live in single rooms in hotels and B&Bs. Some of them spoke to Patrick Freyne. It coincided with Minister for Housing Simon Coveney publishing an action plan for housing and homelessness that includes plans to provide 47,000 units of social housing. Even more people and children live in these inappropriate circumstances going into 2017.

12. Malachy Clerkin encapsulates why a local sports club is usually at the heart of any vibrant Irish community by way of this profile of the ‘young’ Castleknock GAA club. http://iti.ms/2i33TVM

13. Desmond FitzGerald proves good long-read journalism lives beyond 50 years: His account of ‘Inside the GPO in 1916’, is the first-hand account by the father of the future taoiseach Garret FitzGerald. It created a storm by claiming rebel leaders sympathetically discussed the likelihood of the Germans putting a prince of their own on the Irish throne. http://iti.ms/2hk1Bxt

14. One night 40 years ago Laurence McKeown ambushed an RUC Land Rover. He was jailed for 16 years. Now a playwright, “the hunger striker who lived” looks back on his life’s journey in a vivid piece written by Northern Editor Gerry Moriarty. http://iti.ms/2i34g2C

15. Great writers frequently stand out for their searing honesty…That quality surfaces in this exceptional Kathy Sheridan interview with John Banville when he declared, “I have not been a good father.” http://iti.ms/2hkakzr