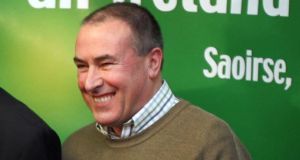 Sinn Fein has accused the DUP of reneging on a public deal made by the late first minister Ian Paisley that Sinn Fein MLA Mitchel McLaughlin would succeed William Hay as speaker of the Northern Ireland Assembly.

The Assembly in a number of votes this afternoon failed to elect a speaker to replace the Derry DUP MLA Mr Hay, after the DUP abstained in the votes. Mr Hay, who has been elevated to the House of Lords, stood down due to illness.

As the election required cross-party support, the DUP abstention effectively acted as a veto on Mr McLaughlin being elected.

The candidates were Mr McLaughlin, SDLP Assembly member John Dallat, and Ulster Unionist Party MLA Roy Beggs. As the DUP abstained on all votes none of the candidates was elected.

The late DUP leader Dr Paisley as first minister had promised Sinn Fein would hold the post of speaker during the lifetime of this Assembly, and consequently Mr McLaughlin had expected to be elected today.

However, during the Assembly debate on the elections, DUP leader and First Minister Peter Robinson called for the issue to become part of the talks involving the five main Northern parties and the British and Irish governments, due to start at Stormont on Thursday. He asked that the election of speaker and of welfare reform be put to the top of the talks agenda.

He said “welfare reform has now been put into the talks process” that Northern Secretary Theresa Villiers convening. “Equally the arrangements and modalities of devolution are on the talks agenda. The election of speaker and of Ministers will be part of that negotiation as well,” said Mr Robinson.

“Talks are to begin very shortly so both these matters can be dealt with together. As we have already completed negotiations and reached conclusions on both of these subjects we can ask the Secretary of State to front-load the talks agenda with these items,” he said.

“We are prepared to honour our existing agreements on both these matters, so hopefully we can have some early success and come back here, perhaps in a week or two and go through the lobbies together on both of these matters,” added Mr Robinson.

His reference to both these matters being completed appeared to relate to a DUP claim that Sinn Fein Deputy First Minister Martin McGuinness had agreed to proposals on welfare reform, but this agreement was over-ruled by Sinn Fein president Gerry Adams. Sinn Fein has denied such an agreement took place.

Sinn Fein MLA Caitriona Ruane accused the DUP of breaking an agreement that meant Mr McLaughlin would be the next speaker. “These are powersharing institutions and it is very important that we support those powersharing arrangements,” she said.

“And the message to the nationalist/republican community given out today in the vote against Mitchel McLaughlin, when people vote against an agreements that were publicly stated by the leader of the DUP - I think that sends out the wrong message,” added Ms Ruane.