But €33.1 million cost of bringing harbour up to standard cannot be covered, chief executive says 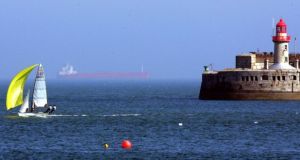 Dun Laoghaire Rathdown County Council is set to recommend the dissolution of Dun Laoghaire Harbour Company and the transfer of its assets to local authority control.

At a special meeting on Tuesday next, members will be told by chief executive Philomena Poole that the best option for the future of the harbour and the local authority is for Dun Laoghaire Harbour Company to be dissolved and its assets transferred to the local authority.

Dun Laoghaire Harbour is currently operated by the Harbour Company which is responsible to the Department to Transport. Under the Harbours Act adopted in 2015 responsibility for numerous small harbours across the State has been transferred to local authorities on the basis that it is more appropriate that such harbours be controlled locally.

But in the case of Dun Laoghaire progress has been slow and a due diligence report was followed by a risk assessment which found the cost of works required to bring the harbour up to “taking-in-charge” standard is €33.1million.

On Tuesday, Ms Poole will tell councillors the council has has no means of funding the €33.1 million and has conveyed this to Minister for Transport Shane Ross. Ms Poole will also tell councillors the ongoing maintenance costs associated with the harbour over five years are likely to be €800,000 a year, which will “have to be provided for in the council’s revenue budget”.

Ms Poole will outline two options for the councillors from which they may chose a recommendation to Mr Ross. The first of these, called Option (a) is the dissolution without winding up of the harbour company. Option (b) is the transfer of the harbour asset to the local authority and the dissolution of the Harbour Company.

Asked to comment on the issue on Wednesday a spokesman for the council issued a statement sating: “A special Council meeting is being held on Tuesday 6th March on the National Ports Policy and the Harbours Act 2015. An information pack has issued to the elected members in this regard in advance of the meeting. No press release has issued and the council has no further comment to make on the matter at this stage.”

A copy of the information pack recommends “that option (b) [the dissolution of the harbour company and taking over of the harbour asset] be pursued as that would provide consolidation, improved links, increased accessibility and connections between the harbour and Dun Laoghaire Town Centre and the wider county (sic) and presents a lower operational risk with direct control of the harbour activity and development”.

The campaign group Save Our Seafront welcomed the chief executive’s strategy. Chairman of the campaign Richard Boyd Barrett TD called on Mr Ross to approve the recommendation and “act swiftly to bring the harbour under democratic control”.