Dublin traffic changes could lead to drop in business for retailers 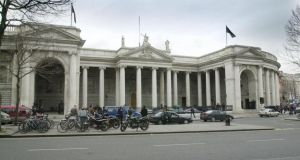 Proposed traffic restrictions in Dublin city centre could result in a 24 per cent fall in shopping and entertainment revenue due to reduced access for cars, according to a Red C poll.

The survey for the Irish Parking Association (IPA), which represents major car park operators in Ireland, found that 41 per cent of retail and entertainment spending in the city centre is by car users, with motorists spending €134 a visit compared to €94 by bus users, €71 by walkers, €112 by train and Dart travellers and €94 by those who travelled on the Luas.

The association has warned that the changes proposed in the Dublin City Transport Study, published in June, would drive business to competing out-of-town centres such as Dundrum, Blanchardstown and Liffey Valley.

President of the IPA Keith Gavin said the association “does not accept that making car access to the city centre more difficult will simply cause people to switch to other modes of transport”.

“People who want to shop by car but find themselves restricted in Dublin city centre will travel to other destinations like the M50 shopping centres or they will shop online, taking money out of the city centre.”

From today cars will be banned between 7am and 7pm from travelling north through College Green.

The parking body said a number of the measures would make access to some parking almost non-existent.

It added that parking and traffic experts had confirmed that users of car parks would travel no more than 300 to 400 metres walking distance to their final destination.

The association said there would be a similar effect on on-street parking revenues, as well as in car parks.

The submission claims the study appeared to be developed with “an underlying bias in favour of all other modes of transport, with the sole exclusion of motorists, for accessing the city centre”.

Three in five city centre shoppers who used their car said they would not do so if the access restrictions proposed were in place and that 10 per cent of all shoppers would not have visited the city centre, according to the survey.

A spokesman for Dublin City Council said the public consultation phase had only ended on Friday, the extended closing date for submissions.

“Where we’re at now is very much in its infancy,” he said. They would have to collate all the data from the large number of submissions received.

“Obviously access to car parking is going to be huge and we are very aware of that.”