Dublin Marathon sells out for first time with 19,500 entrants

Marathon now fourth largest in Europe as numbers for October race increase by 4,500 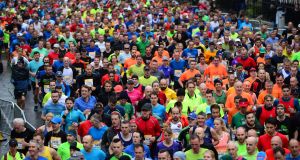 This year’s Dublin Marathon has sold out for the first time with 19,500 people due to take part this year.

This jump in numbers makes it the fourth largest marathon in Europe.

Race Director Jim Aughney said he was “delighted with the record numbers,” adding “it gives the team great satisfaction that the appeal of the Marathon and Race Series continues to grow”.

Separately, the SSE Airtricity Dublin Half Marathon which takes place this Saturday is also sold out after increasing it numbers from 7,000 in 2015 to 9,500.