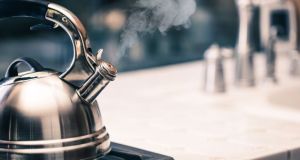 Irish Water has confirmed that a boil water notice remains in place for some 600,000 people following an audit of one of the main treatment plants supplying drinking water to the greater Dublin area.

The company said the decision to keep the precautionary measure active was taken following consultation with the HSE and Fingal County Council about the safety of drinking water supplies to large parts of Dublin city and its commuter belt.

On Thursday, officials from the Environmental Protection Agency carried out an audit of the Leixlip water treatment plant where problems with the drinking water supply were first detected at around 11am on Tuesday.

The boil water notice was put in place following a mechanical breakdown in the disinfectant processes at the plant.

Irish Water said last night that test results of a water sample taken earlier in the week were found to be satisfactory.

A further meeting is due to be held on Friday between the EPA, Irish Water, Fingal County Council and the HSE to discuss the preliminary findings of the audit.

The results of a second water sample are also expected to be available.

Irish Water’s head of customer operations, Yvonne Harris, said the company acknowledged and understood the impact that the boil water notice was having on affected customers and apologised for the inconvenience.

“It is our priority to work with the HSE and the EPA to get the boil water notice lifted as quickly as it is safe to do so,” said Ms Harris.

Irish Water said the initial problem that compromised the disinfectant process of water at the Leixlip plant on Tuesday has been repaired.

However, the utility said untreated water probably remained in some 20 per cent of the network.

The HSE said there was a danger that untreated water in the network may contain cysts of cryptosporidium and giardia. These microscopic parasites may cause gastrointestinal infections with symptoms such as diarrhoea and stomach cramps. It advised people who develop such symptoms to consult their general practitioners for testing and treatment.

Irish Water warned there may be “residual” untreated water in the network for several days as treated water flushes the system.

Meanwhile, it emerged an audit carried out on the Leixlip plant earlier this year found a series of events which occurred over three days in March posed “a significant risk to the safety of the water supply”.

The audit by the EPA found Irish Water failed to consult the HSE about the risk to public health caused by a temporary loss of controls at the Leixlip palnt to prevent cryptosporidium and giardia.

The problem resulted from a pump failure which went undetected for almost eight hours on March 13th and 14th. It allowed small particles of sludge into treated water and resulted in above normal levels of aluminium and turbidity (cloudy water).

The EPA found that while Irish Water sought advice from the HSE about the high aluminium levels in drinking water it did not refer to the HSE about “the more significant issue” relating to the temporary loss of cryptosporidium and giardia barriers.

The audit found Irish Water also failed to take samples of treated water during the critical period following the incident.

While samples taken on March 17th and 18th tested positive for giardia, Irish Water said it did not believe the detections were linked to the pump failure and the cause remains unknown.

Data from the Leixlip plant also led the EPA to discover that there had been an uncontrolled release of large quantities of raw sewage into the River Liffey between Newbridge and Leixlip around the same time.

A separate investigation by the EPA found numerous breaches by Irish Water of its licence over the release of the untreated sewage from its Newhall pump station located near Naas, Co Kildare over three consecutive days.

The watchdog established that up to 12,300 cubic metres of raw sewage was released into the River Liffey on March 14th to 16th due to the failure of pumps at the Newhall plant.

Irish Water was also in breach of its licence for taking a week to notify the relevant authorities about the discharge into the Liffey.

The EPA confirmed yesterday that it had initiated a prosecution against Irish Water over the issues at the Newhall facility.

“Irish Water should have notified the EPA, Inland Fisheries Ireland and the Leixlip water treatment plant as soon as practicable after the release of the raw sewage. Irish Water failed to do this and only notified these bodies of the incident on March 21st, 2019,” the EPA said.

Irish Water said it was contacting all registered vulnerable customers who are affected by this boil-water notice to advise them.

It has asked anyone with queries to contact Irish Water on its helpline (1850 278 278) or to check its website (water.ie) for updates.