Driving tests, licence and insurance should be required for e-scooters, says council 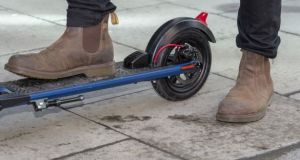 Dublin Chamber believes that insurance and road tax should not be imposed at a prohibitive cost for e-scooter users, and other personal powered transporter users”. File photograph: Dave Meehan

Dublin City Council and Dublin Chamber have clashed on the future use of electric scooters which have risen in popularity as a method of travelling on congested streets.

In a submission to the Government’s public consultation on the use of e-scooters, the City Council insisted rules should be applies including high-visibility clothing, driver testing and insurance.

However Dublin Chamber said it is wary of regulation that might make conditions prohibitive for escooter users, thus preventing a much needed “modal shift” in transport terms.

With speeds of about 25km/hr and more achievable, escooters can travel close to the legal speed limit in much of the new 30km/hr zones which Dublin City Council has been implementing in recent years.

Currently as the law stands “personal powered transporters”, as they are formally known, are considered to be mechanically propelled vehicles. Therefore they are required to be registered, have motor tax, and the driver must hold a driving licence and insurance.

However despite all the requirements, as the scooters fail to meet the criteria for registration in terms of minimum required safety standards, they are “therefore not allowed on public roads” according to research carried out for the Road Safety Authority.

Faced with the growing popularity of scooters the department of Transport recently held a public consultation on the use of the devices. Dublin City Council submitted that driving tests, insurance, helmets and high visibility clothing should be imposed of those using them.

But as part of the same consultation Dublin Chamber said: “if smart city solutions such as e-scooters are to be held back by laws that predate the possibility of their existence, it sets a negative precedent for the embracing of opportunities presented by new technologies in the fight to reduce emissions”.

It also argued that Dublin had some of the worst traffic congestion in the world and that public transport planning “should include provision to optimise the potential of smart city solutions like e-scooter technology.” While it was in favour of some regulation regarding protective and high visibility clothing it added: “Dublin Chamber believes that insurance and road tax should not be imposed at a prohibitive cost for e-scooter users, and other personal powered transporter users, as this may result in a pullback in their popularity and discourage modal shift.”

Minister for Transport Shane Ross is expected to rule on whether the law needs to be changed to accommodate e-scooters in coming weeks.